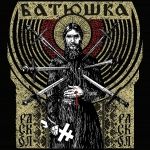 For those not quite up to speed on Poland’s BATUSHKA, here’s a brief recap. Back at the end of 2018, the band split into two separate bands while keeping the same name (as the original members both claimed they kicked the other out of the band). Now what this means is… Fans now get two versions of the same band with hopefully new albums continuously from each. For fans of both versions, it’s a win-win situation. The Барфоломей version, which released “Господи / Hospodi” in 2019 have now released a new EP entitled “Раскол / Raskol”. And fuck if it isn’t marvelous. Followers of BATUSHKA also know that their brand of Metal isn’t your average Metal. Their Orthodoxian style is intelligent, mesmerizing and vicious, all rolled into one. Acoustic guitars and a brief chant start out ‘Irmos I’ before erupting into a blistering dagger of Black Metal guitars which lead into more chanting and a powerful, plodding and downright filthy swagger of a song. ‘Irmos II’ is similar in its acoustic intro for a minute and a half until smashing us in the face with a wall of pure musical force. There’s so much emotion and epic changes throughout the track that it literally stuns the senses. ‘Irmos III’ is sheer beauty with vocals that could vibrate through the very souls of the fucking universe. ‘Irmos IV’ brings in the chants again which are a ticking clock counting down until the nuclear outburst of one of the fastest riffs I’ve recently experienced shatters the glass around us. The final track ‘Irmos V’ is a fucking heavy piece of glorious songwriting that ends the EP on an extremely satisfying note. There’s really nothing like BATUSHKA, or this version at least. Here’s a band that delivers Metal in an original form that both enlightens and heightens the senses in ways unrealized until your fucking jaw hits the floor from absolute amazement. Why are you still reading this? Go listen to it… now! For more information, check out www.facebook.com/batushkaband, www.witchinghour.pl