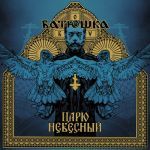 Ok, it gets a little confusing. So, I won’t even try to explain. However, there are two bands named BATUSHKA. Members of both claimed they kicked the other out of the band (well, I guess that’s an explanation, but whatever.) The good news is, fans hopefully get double the amount of albums because of it. I’m fine with that. It’s like having a siamese twin girlfriend who eventually has an operation to separate them. So now you have two girlfriends. The year 2020 wasn’t all bad. BATUSHKA (the one I’m writing about now) released an EP “Raskol” which was damn good. Now, less than a year later, they drop another EP titled “Carju Niebiesnyj”. And as expected, their orthodoxian Black Metal is superb. ‘Pismo I’ gently eases into the speakers before monk-like chants pierce the veil in an atmospheric mist and eventually erupt with rapid drums to bring it all together. BATUSHKA waste no time with blasting us with classic Black Metal riffs and vocals that sound like an amorphous beast clawing its way out of the nearest abyssic pit. ‘Pismo II’ sums up the glory of this version of the band. ‘Pismo III’ is pure aggression. Goddamn if this group of songs isn’t exactly what this year needs. The power in each track is fucking epic. ‘Pismo IV’ slows it down just a touch, but is no less destructive in its sheer force. Show me your favorite new album and I’ll throw this crushing masterpiece back at you. The fifth track (you guessed it)… ‘Pismo V’ mixes both male and female chanting before the final track ‘Pismo VI’ staggers forward with the pomposity of one thousand victorious ogres. BATUSHKA may deliver heavy-ass Black Metal as we have come to expect from this Polish monolith, but they also find a way to bring their own bit of brilliance to it, keeping it fresh and new with every listen. There are few bands that just sound… right. There are a miniscule amount of bands that bring something new to the table each and every time. BATUSHKA does this consistently. This is 27 minutes of absolute fucking bliss. Give it a listen. If you don’t embrace it with all your black heart, I’ll lay in a fucking mountain of fire ants, wearing only a thong and covered with honey. For more information, check out www.facebook.com/batushkaband, www.facebook.com/witchinghourpl