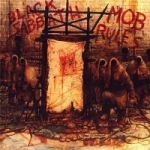 A lot of you reading this will probably accuse me of being an ignorant fool, if I tell you that the original BLACK SABBATH line-up with Ozzy never did anything to me… I simply couldn’t stand the vocals (a fact that quickly changed when Ozzy started to release solo records, which I do like a lot!). That’s probably the main reason why I never ever owned any classic BLACK SABBATH album. But when former RAINBOW frontman Ronnie James Dio came on board in 1980 for the "Heaven And Hell" album, the band quickly turned into another favorite of mine! The heavy riffing of Tony Iommi in combination with Geezer Butler’s pounding bass and Bill Ward’s (and later on Vinnie Appice’s) effective drumming simply needed a far more powerful vocal delivery… and the "little man with the big voice" was definitely the perfect choice for the band! Okay, the madness and insanity that Ozzy used to be known for was definitely gone, but Dio’s strong charisma and perfect vocal delivery easily made up for that in my opinion. Even after so many years, both studio albums that this fantastic line-up recorded at the time still send shivers down my spine and I can’t decide which one I like better. ‘Neon Knights’, ‘Children Of The Sea’, ‘Heaven And Hell’ or ‘Die Young’ (from "Heaven And Hell") or ‘Turn Up The Night’, ‘Voodoo’, ‘The Sign Of The Southern Cross’, ‘The Mob Rules’ or ‘Falling Off The Edge Of The World’ (from "Mob Rules") are eternal classics, that easily stood the test of time next to the old standards of the Ozzy-era. So, it’s great to see that Universal Music also decided to re-release the 3 BLACK SABBATH albums of this period ("Live Evil", the 1982 live album, completes the triumvirat) in their "Deluxe Expanded Edition" series, as usual with fat booklets and several extra stuff of course. So, what do we get in the case of the "Mob Rules" album then? Next to the regular nine album tracks Disc # 1 of this "Deluxe Expanded Edition" additionally features a live version of ‘Die Young’ (taken from the B-side of 1981’s ‘Mob Rules’ single) and – probably even more important – the original demo version of ‘The Mob Rules’ (from the "Heavy Metal" movie soundtrack), which was even better than the album recording that was about to follow later on. Disc # 2 features an excellent DIO-era BLACK SABBATH live show, recorded at London’s Hammersmith Odeon between December 31, 1981 – January 02, 1982. It was previously already released in the US back in 2007 as a limited edition CD entitled "Live At Hammersmith Odeon". The setlist is almost identical to "Live Evil", with the only difference of ‘The Sign Of The Southern Cross’ and ‘Fluff’ that got both replaced with ‘Country Girl’ and ‘Slipping Away’ here. So, even if you already own the original "Mob Rules" album, you definitely shouldn’t miss out on this (or any of the other) re-release(s) as well! Excellent! www.blacksabbath.com, www.universal-music.de.