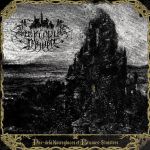 One or the other may have heard the name of the French underground Black Metal label Les Acteurs De L’Ombre Productions. More often if not all releases have some special approach to the genre Black Metal, some may call it avant-garde. Generally the whole work of the label, by the way run by volunteers on a non-profit base, can be summarized under the slogan “more than music”. So for example 50 copies of the debut by CRÉPUSCULE D’HIVER are going to be released in a unique handcrafted wooden box with special items, completely financed via crowd funding. While writing these lines the amount of nearly 9.000 Euro was collected. Stuurm (vocals, lyrics, guitars, keyboards) is the pseudonym of the man behind the band. And as usual the question appears – band or project? Regarding the outcome definitely more band than some half-cooked and underdone side project by one or more bored musicians. As you have noticed the running time is quite long, but distributed differently. We have two short (about three minutes long) keyboard / synthesizer only tracks, four songs with a playing time of more or less than ten minutes and the title-track clicks at twenty minutes. Early works of Scandinavian Black Metal form the groundwork of “Par​-​Delà Noireglaces Et Brumes​-​Sinistres”, especially the SATYRICON debut “Dark Medieval Times” with its (nomen est omen) medieval touch. CRÉPUSCULE D’HIVER are enhancing the emblematic Black Metal with a huge influence of synthesizer / keyboards emerging from the sub-genre Dungeon Synth, mainly SUMMONING came to my mind. Elements like church bells, flutes, female vocals are making an appearance, but within narrow bounds so at every moment you are aware of listening to Black Metal. What stroke me the most about this album is the songwriting quality. Everything comes totally natural, a constant flow of excellent music. And this flow evokes a romantic atmosphere. Romantic not in the meaning of a candle light dinner, but in its genuine definition – strong emotions like desire, hate, longing for nature, mystery, escapism and a vision of medieval times. One band that in my eyes perfectly captured this romanticism was DORNENREICH on their first three albums. Since the linguistic barrier CRÉPUSCULE D’HIVER are not on the same level for me, but very close. More information can be found on the band’s facebook page www.facebook.com/crepusculedhiver and do not forget to visit www.lesacteursdelombre.net to check out other great bands.