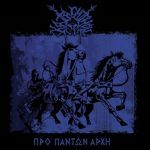 KATACHTHON is a killer bestial Black / Death / War Metal band from Greece. “Προ Πάντων Αρχή” is their first EP, originally recorded and released in 2017 by the Greek label Black Sun Cult Productions. Here we have a reissue of this obscure gem recently re-released by the Polish label Fallen Temple with some bonus tracks too. This new version contains the four original songs from 2017 and four songs taken from the 2019 single “Συρακούσιος τύραννος” and the 2020 single “Οιωνός θανάτου”, all remastered and remixed. The cover artwork is the original one with a Greek hoplite riding a two-horse biga. An artwork entirely in line with the whole concept focused on Hellenic history, war and mythology. A kind of imagery often used by Greek Black Metal bands UNHOLY ARCHAGNGEL and NOCTERNITY, just to name a few. Musically here we have a good example of morbid and aggressive bestial Black / Death Metal. Raw and brutal stuff in the vein of BLASPHEMY, PROCLAMATION etc. Very distorted guitars with some noisy and cacophonous solos, tons of blastbeats, a present bass and a very deep and cavernous style of guttural growlings. In conclusion this is a very enjoyable release for fans of savage Black / Death Metal. A total of eight songs for almost 37 minutes of sonic profanations against the modern world. If you have a reactionary soul, get this album! www.facebook.com/katachthon, www.facebook.com/fallentemple666