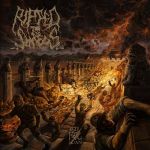 Being named after a TERRORIZER song is certainly not the worst idea, especially when the music takes a similar direction and reminds of the forefathers of Grindcore. “亂 (Luan)” is the second album of this one-man project by Andrew Lee, who is also active in a few other bands. Interestingly RIPPED TO SHREDS has two different line-ups for concerts, one in Taipei, Taiwan and the other is based in San Jose, California. Musically the above mentioned TERRORIZER plus some Swedish inspired Death Metal riffs form the core of “亂 (Luan)”. The opening of the third track ‘白骨精 (White Bone Spirit)’ even tangles up with EDGE OF SANITY. A track like ‘黑木崖_ 日月神教第二節 (Massacre At Blackwood Cliff – Sun Moon Holy Cult Part 2)’ surprises actually with Doom Metal passages. So you will not get a straight forward Grindcore album, instead the music is refurbished by adding moments of other genres. As the short running time suggests, these moments are only short, at at the end of the day it is still a Grindcore album. Just in case anyone wonders about the title, the output is a concept album dealing with an old Chinese folk tale. All vinyl maniacs are pleased with following efforts: the album is released in black vinyl (limited to 300 copies), orange & mustard merge with black, gold and brown splatter (100 copies) and the good old clear splattered vinyl (100 copies). Although RIPPED TO SHREDS are traveling well-known paths the music is played with dedication, the sound is good and I have nothing to criticize. More information can be found here: www.facebook.com/rippedtoshredsband, www.facebook.com/pulverisedrecords