Canada has always delivered when it comes down to excellent music and ALTERED DEAD is no exception. They started in 2013 and after a single and a demo tape in 2014, their debut album came out in 2016. An brilliant and crushing slab of pure, unadulterated Death Metal. But showing a promising future was not enough. They returned in 2021 with their sophomore album, which is yet another solid step in their career. The improvement in sound and identity is simply amazing, but also holding onto their roots in late 80s / early 90s Death Metal. Mic (guitar, bass, vocals) kindly answered some questions regarding their past, present and future… 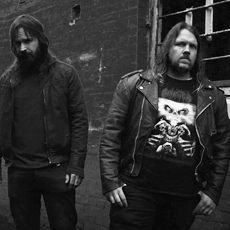 So here’s the mandatory first question: when and how did ALTERED DEAD start as a band?
“We started the band in around 2012. Julian and I were playing in a Black Metal band called SHIBBOLETH. I was doing guitar and vocals, Julian on bass. So, our friedship sort of stemmed from that. I had electronic drums and a handful of songs that I had written on a 8 string, and so he and I just started to play in what became ALTERED DEAD. We left the Black Metal band shortly after.”

Have your previous bands / projects (SHIBBOLETH, LEGIT HEAT, RESENT) influenced directly ALTERED DEAD? How do you manage to keep ALTERED DEAD isolated, so to speak, from your other bands in terms of music and lyrics? Or do you incorporate and share riffs and ideas between them all?
“Well, we have played in various bands over the years, and each one has already put into place what they are meant to be. ALTERED DEAD is no different. It’s an outlet for a specific sound. And sure, having the experience of playing other genres is helpful and likely has shaped some aspects of the band, but its also easy to keep it seperate as well.”

When it comes down to music and lyrics, is it a shared process where you both work on the songs from scratch or do one of you come in with finished songs?
“We collaborate on lyrics and rhythms, I have done a good amount of the songwriting on guitar, however Julian has a good handle on the guitar as well, so he’s always got something to contribute, which is great when I’m stuck on writing a part. Sometimes the songs come as we practice, but most of the time they are pre-written on guitar, shaping drums and vocals after.” 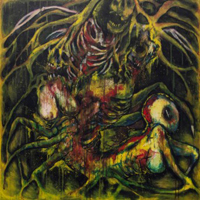 Which are your main inspirations and influences when writing the lyrics and the music?
“That comes from within, and moods I’d say have a big roll to play when writing lyrics and music. It’s pretty cool when you can take the way you’re feeling in any given day and put music or lyrics down… it’s a good way to get shit off your brain!”

Did you have a specific idea of where you were headed, stylistically, when you recorded your 2013 two song single? How did those songs develop since their inception? How did the recording process go and how was it received in the underground back then?
“We pretty much knew what we wanted to get out of ALTERED DEAD from day one. We were listening to a ton of bands like DEATH BREATH, AUTOPSY and a bunch of Crust Punk was rolling through the town pretty consistantly. And it was just what fit for us. People have generally been stoked on what we’ve been doing live and we are lucky that we have our friend Cody here to help us record this stuff. Though the 2 song demo was recorded by our friend Kevin Smart.”

You brought in Brynne as bass player for your 2014 demo tape. How was the band working as a three-piece? Also, why did he leave before you recorded your debut LP? Initially that demo tape was an independent release, but then Canadian label No One’s Ark also released it in tape format. Were you happy with that release and how did you come in contact with the label?
“Brynne is a good friend of ours, and we had a good time with him on bass, but we were a two-piece for a while before he came in on the cassette release and so when he left the band, we decided to keep it tight. Two-piece has worked well for us so far. No One’s Ark and Echoes From Beneath helped us pay for our demo tape which was limited to 100 copies (sold out). These are old friends of ours and they just wanted to see us get a release out. We were very happy with how that was released, and proud to have our friends support with it!” 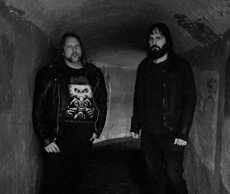 You went back to a duo to record your self-titled debut album and you recorded all your songs off the demo tape. Did you think about using all new material or did you want to use those songs right when you signed with UK’s Cavernous Records. How did the label contact the band and were you happy with how they handled your debut recording?
“We got approached by Cavernous Records through either our email or Facebook page. They wanted a full length recording, but we didn’t have enough material at the time to offer a new album, so we compromised and took the 5 songs we had been working on and combined them with the cassette. We kept the original 7 songs pretty much the same, except one of the songs we changed one riff. You probably wouldn’t really notice the change honestly. Cavernous were extremely good to work with and this was our first vinyl release as individuals, so it was a pretty awesome thing to have happened for us. They really put a lot of energy into making sure the release was of good quality. Thanks Chris!”

There was a four year gap between your first album and your most recent one, “Returned To Life”. Were you dedicated to your other bands / projects, did you want to take a break for any given reasons or did you just take some time to come up with such an amazing record?
“We did other projects all while continuing to play live as support for the bands that came through our city, so we were still active, it just didn’t feel like there was any rush to get another record out. We casually were writing the whole time and some of the songs will never even be heard. By the time Memento Mori contacted us to do our second record we were ready and had everything in mind for what “Returned To Life” was going to be.” 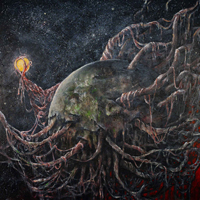 How was your return (pun intended) to working on new songs as a duo? Where was the album recorded and how was that process? How did you feel when you listened to the completed work?
“Julian and I are a good team. We know the way each other play and can just rip no matter how long of a break. That comes from the years of playing together. We have always recorded with Cody at Circle A Studios, so the process is familiar and so is the person we work with. It’s really a good time. We all sort of know what to expect from each other. When we got down to the mixing faze, we were there with Cody for a lot of that too. But he’d also work on it on his own too, which is really great. By the end of this recording we had zero complaints. Then I remember getting the master back from Loic at Krucyator Studios and that’s what really took it up a notch. Both these guys know whats up!”

This time Spanish label Momento Mori stepped in to release your sophomore album. Did the label contact you? Are you satisfied with the work in terms of promotion and sales so far?
“Actually it was a bit more promotion than we had inticipated. There was and still is a lot of attention on this record. Memento Mori reached out to us through our Facebook and wanted to see if we were ready for a new release, but also wanted to see if Cavernous Records was ok with the change over. So, after all that was talked about. Returned To Life was a deal. Memento Mori also worked hard to find us Fucking Kill Records to do our vinyl release too, so we were especially thrilled with that. As far as sales go? I just know the vinyl is sold out asides from like 10 copies here in Canada at War On Music and we have about 15 copies.” 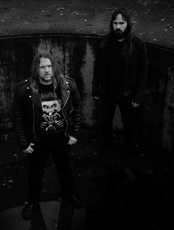 Have you considered going back to a power trio for your future material? Or maybe adding live members for gigs? Or do you think working as a duo is what you need to keep churning out crushing Death Metal songs?
“Sure, but we’d like that person to be someone we know well. We have a few people that would probably do it, at the same time, we aren’t too worried about it. Live I can use two heads and two cabs ABY and that’s pretty crushing. Mixed with using the 8 string guitar, it’s pretty full sounding.”

Even though we are all still doubtful about the end of the global pandemic, has this helped you out with any aspects as a band?
“That’s a mixed response from us. Rehearsing has suffered do to restrictions, but it also gave us time to record and is giving us time to write. I can’t say the pandemic is good or bad for us as a band. It is what it is. I really don’t think live music will be a thing here until 2023, but I could be wrong.” 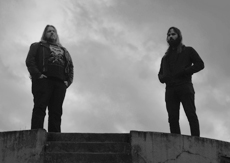 What are your future plans?
“Same shit as always. Come up with new songs and rehearse. And one day we’ll come out with the third album. Working on a title now, I do know that it won’t be five years for the next one though!”

Well, that was it. I can’t thank you enough for answering these questions. I hope you had fun answering them. I am already looking forward to your new material. This space is for you.
“Well, the response has been incredible and we thank you all for reading this and listening to us. If you haven’t checked out our first album, please do. Thanks for reaching out to us for this interview and thank you Memento Mori (CD), Fucking Kill Records (LP), Headsplit Records (US cassette), Epidemia Records (EU Cassette), Tarung Records (South Pacific Cassette), Cavernous Records (CD / LP) for helping us spread this music around the world. Couldn’t do it with out you all.”