The Swedish viking Death Metal horde AMON AMARTH has prepared to battle “Versus The World” in 2002, but before they start crushing humanity and crack my skull with a viking broadaxe I decided to use my last chance for a talk with the band. Fredrik Andersson (Drums) gave me some information about AMON AMARTH’s fifth release and unveiled the details of their “fighting the world”-plans. Besides that we talked about funny delirium-accidents and his faible for Grind


Well, you got a new, fantastic album out called ”Versus The World”, how did press and fans react on it so far?
“We got great reactions so far! I haven’t heard so much from fans yet, except from those who got a pre-listen and those who has downloaded it for free, but only good reviews until now!”

How would you describe the new CD, what – according to you – are its significant changes both musically and lyrically?
“Musically, it’s heavier and a bit slower, more mid-tempo and I think there’s a little bit different sound which is quite obvious since there is a studio change. However, I think we still have kept our sound, only that we got more closer to how we sound in the rehearsal-room and live. Lyrically, I think it’s mainly the same themes we always have dealt with.”

Does dealing with vikings and the nordic mythology ever get boring? Did you ever think about changing your lyrical main topic / band concept?
“That should be a question for Johan, but I don’t think so actually! He’s very interested in our history and reads a lot about this subject as it is. And of course this is something close to all of us, close to the heart. It’s something we can stand honestly behind and it’s not a “false” gimmick or image.”

How can one understand the album’s title ”Versus The World”? Is it a threat, or what???
“No, it’s not a threat. It can more correctly be explained as our fights, struggles and difficulties towards the rest of the world’s opinion. It could also be some underlined truth (there might have been some subliminal messages in all our releases!) We do a lot of things mainly for ourselves… perhaps only we recognize it, but if someone else does, that’s a bonus for us!”

What do you intent with singing about vikings, their life and mythological background? Do you just like describing past times or does this concept include a certain message? 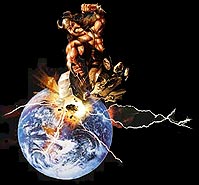 “I think I tried to answer this question already above. It’s an interesting world and time, at least for us and hopefully it can be enjoyable and known also to more people!”

The Abyss sound has become quite characteristic for AMON AMARTH, because even your first MCD was recorded with Peter Tägtgren. Now ”Versus The World” was recorded at Berno Studios… Why did you change the Recording Studio? Did that cause any personal conflicts with Tägtgren?
“It wasn’t our choice from the beginning to change studio, that’s Peter’s decision and something he probably can explain more thoroughly. But I understand him in this thing and we have no hard feelings what so ever!”

I think the new album contains even more mid-tempo, hymnic stuff than the previous release. Don’t you like fast, blasting stuff? Are you interested in realizing musical interests in a side-project?
”I love fast stuff! And to be honest I already let my grind out in different ways. I recorded quite recently a demo with the help of Linus Nirbrandt mostly for myself with some stuff that was too fast or for some other reason couldn’t be released as AMON AMARTH. The reason “Versus The World” is heavier is cause the whole concept for the album is about “Ragnarök” in nordic mythology, and that’s a pretty heavy thing to deal with!”

Song number seven on the new album, ‘Thousand Years Of Oppression’, is rather unusual for AMON AMARTH with this spoken passages… What can you tell me about this song especially?
“It’s one of the last songs we had finished for the album and it’s one I’m personally very happy about. It reminds me of the atmosphere on old AMON AMARTH songs and that Johan speaks on it just builds up this feeling even more! I think actually Johan wrote that lyrics in, or on the way to the studio cause the first time I heard it was in the mixing, and I think it’s cool he does something different we haven’t done before.”

What’s your opinion about the Swedish Metal scene? What bands / styles do you like especially, which abolutely not?
“There are too many bands here in Sweden! : -) Well, I’ve always been a fan of THE CROWN, AT THE GATES, DISSECTION, old ENTOMBED to name a few, and recently have discovered bands like Darkane, Dimension Zero but there’s just too many bands to be able to hear them all, at least that’s what I think.”

What do you think of the traditional Swedish cult acts like NIHILIST, CARNAGE, HOUSE OF USHER, MERCILESS…? Do you have any favourites of the late 80s, early 90s outside Sweden?

“Of course. All those bands in the beginning of Swedish Death Metal mean a lot, and were all big influences. In some way they even helped to build up the great Death Metal scene, especially here in Stockholm!”

AMON AMARTH’s style is quite its own thing, but it’s still Death Metal… How would you personally define ”Death Metal”? What is the most important in the Death Metal lifestyle?
“Well I don’t think it’s that important to label what’s Death Metal and what’s not. When I was younger, Death Metal for me was black jeans / army pants, a bands tee and a leather-jacket. But I’ve stopped to care that much, nowadays I wear clothes that are comfortable and don’t care so much what color they have. I don’t have to prove for someone else my opinion, my taste in music or anything else. That’s personal for me and if someone doesn’t like it I couldn’t care less, I think that’s significant with our music.”

You have been on tour with MARDUK, who are widely known for their love of militaria and controversial CD titles like ”Panzer Division Marduk” or ”Live In Germania”… What do you think of this provocations and this band in general?
“I like them as persons, they were one of the coolest headliner bands we have toured with! I’ve never been that much into their music except their first, since I was really into EDGE OF SANITY at that time. But I never have had an opinion about their political or religious believes, that has to stand for them.”

What do you hate most about today’s Metal scene?
“That it’s not bigger. That it has to be such a wide gap between all different categories. The scene would be so much bigger if all different Metallers didn’t have to fight each other, be it Black, Death or whatever. When I started to listen to this kind of music no one gave a shit about if you were Thrasher, Death, Speed, Heavy etc… everybody went to the shows and had a great time! It was what made it so big, and it was everywhere! TV, Radio, different shows every week and so on… Sure, it wasn’t always the hardest music but at least Metal was represented and no one blamed anyone else for what they listened to!”

Are you still interested in underground bands? Are there any you can recommend?
“Yes, I’m still interested in it. I’m not tape-trading anymore but… (does it exist still??) (DEFINITELY!!! – Stefan) I like to read reviews and interviews about demo bands and sometimes buy one, mostly from someone I know. Long time ago I saw someone walk around with a plastic bag at a show, selling demos… INSISION is a damn good band, I think they have a CD out now… can be worth to check out.”

What inspires you most? Do you need a special atmosphere to be creative? 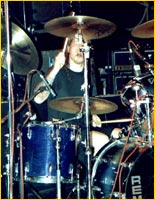 “No, the creativity comes whenever it needs to come out, we have of course an inspiring atmosphere in the rehearsal room… dark, soft lights and some inspiring viking symbols.”

What are your greatest influences musically and lyrically?
“It’s so different, what most often inspire is old classics within music, but it happens quite often you get surprised by a new band. Johan gets most lyrical influences from old stories and books.”

What’s your favourite AMON AMARTH song?
“Tough one… I think ‘Burning Creation’ cause it was the first one I heard and it was the best demo I had heard in a very long time so I was impressed.”

What were the latest albums you bought?
“SAMAEL – “Passage”, BORKNAGAR – “Quintessence”, NILE – “In Their Darkened Shrines” and I’ve ordered the movie music for “Stigmata” (Billy Corgan / ex-SMASHING PUMPKINS) and the latest HALFORD.”

Are there any Metal legends you wish you could work with once? Maybe Mille, Quorthon, Schmier or even James Hetfield?
“No, actually not. Sure they have made great stuff, but I never have been into idolizing and don’t see them as anything else than normal people. And everybody who has played in more than one band, knows how difficult it can be to work with someone you don’t know. Personally I enjoy more to play together with someone I know, how they work and who I know understand me and vice versa.”

How did you like this year’s Wacken Festival? A lot of people were very upset about its miserable and chaotic organization! I think the organisators are meanwhile only interested in making money than in making a good festival!!! What’s your opinion?

“We had a really great time there! Sure, we had really problems with our hotel rooms but that’s nothing that bothered us. I find it hard to believe that the fans who were there didn’t enjoy the festival, except for the rain maybe… : -) Problems with the organization is something the fans doesn’t recognize over and it’s our job as a professional band to not let them see it in our show! However, I’m sure it must be a difficult job to organize a festival with that many bands and more than 25.000 people, I don’t blame them if it didn’t work totally without problems!”

How did you come to use the ”Wicki” music as live intro?
“A friend of us said it’s a really famous comic in Germany (it’s hardly known here in Sweden) and sent it to us, so we thought it would be a fun idea to use it when we played in Essen, since it was the last show of that tour.”

Do you remember a disgusting or funny anecdote you experienced on tour?
“It happens something disgusting, funny or strange everyday on tour! The most funny thing I have right now in memory though is when Olli became so drunk after our show in Hamburg that he fell from standing on top of a stair so the club organizers came and put him on a stretcher! He had such terrible pain in his chin for days after he even couldn’t move his head… ha ha.”

When will be the next chance to see AMON AMARTH live in Germany?
“I hope we will be able to tour again in the beginning of next year but we don’t know anything yet except the Bang Your Head festival.”