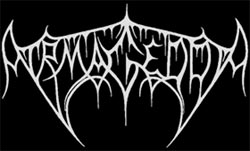 After an incredible amount of extremely stupid mainstream Black Metal wannabees, Sweden finally managed to give birth to an extremely promising new band in the raw and evil DARKTHRONE tradition. They started out as VOLKERMORD, but changed their name into ARMAGEDDA pretty quickly and just released a highly impressive debut full length entitled “The Final War Approaching” (check out the review section for all further details). To introduce you to this unholy force of evil a little more in-depth we contacted the band’s founder and bassplayer "A" for the following interview…


Ok, let’s go back in time a bit – according to the info sheet of your label it was you who started ARMAGEDDA back in early 2000… But at that time it was basically just a musical vision of yourself (and not a real band yet), wasn’t it? Tell us how everything developed from the basic idea up to the time when you finally started to write your own lyrics and music.
"Well, it was growing and growing inside my head and I couldn’t stand it anymore. The beast was unleashed and see where we are now."

I suppose the idea to name the whole project VOLKERMORD was also yours… But VOLKERMORD (or actually VÖLKERMORD) is the German word for genocide, which is a pretty unusual name for a band from Sweden, don’t you think?! So, how did that name come about? Do you speak any German? Why did you pick a German band name instead of a Swedish or English for example?
"First, I don’t speak German. Second, why we chose that name is because it has no meaning. As you could see we didn’t use the Ö, so the translation cannot be genocide."

Have you been writing and / or performing music previously already? I could imagine that you experienced something very influential at the time, something which impressed you so much that you wanted to start up something on your own… So, what was it – a certain band maybe? Or a song, a book, a movie…?
"I haven’t performing anything of intereset before Armagedda. No books, no movies were involved in the creation of Armagedda. Only the ideas of spreading propaganda lead to our origin."

Was it clear for you right from the start that the result definitely had to be Black Metal? What is so fascinating for you about this musical genre?
"Yes, that was the idea from the beginning, to play old school Black Metal with influences from the 90’s Black Metal scene in Norway. Bands like Darkthrone, Satyricon and for example Burzum have inspired us alot when it comes to the creation of the music. What’s so fascinating? Well, the fanatics! The real worshippers of Black Metal."

At the time when you started, the big media interest in “Black Metal” already began to fade away again. Did you actually follow the “evolution” of Black Metal, from the good old days of early MAYHEM, DARKTHRONE, BURZUM etc. up to the time when most of the bands involved ended up sounding rather stupid and mainly seemed to care for the big success instead of the creation of frightening anti-commercial satanic music?
"No, I did not follow the evolution of the old bands. I stopped listening to MAYHEM after "Wolfs Lair Abyss". I don’t know, maybe they are still serious in their believes. I don’t know why they want to get big and famous and earn a lot of money. That’s their business."

What do you think about bands like IMMORTAL, DIMMU BORGIR, SATYRICON, EMPEROR etc. who all started out very angry and dedicated, but over the years changed towards a more and more easy accessible attitude and musical direction?
"I don’t know, I don’t care."

Most of the bands also dropped their corpsepaint after a while, calling it a “natural progression” or a process of “growing up”. How important is corpsepaint and the whole visual side for you? Could you imagine to present yourselves without all that as well sometime in the future?
"It is not deadly important with corpse paint. But of course, it is a part of Black Metal. A part of the image and also the spirit. I think there is a big chance that you will see Armagedda without corpse paint in the future sometime…"

When and how did you actually hook up with Graav and Phycon on vocals / guitars and drums respectively? Have they been in any bands previously? Were they involved in any way in the writing of the material which ended up becoming your one and only VOLKERMORD demo tape?
"I knew Phycon since back in ’97 or something like that. Me and Graav got in touch with each other some years ago. Both of them did alot of the music on the VOLKERMORD demo tape. They had a band in the late 90’s, but that is another story and kind of boring."

Before you went into the studio to record the demo you also did a rehearsal tape, but decided not to release that. What was the reason for that? Which songs would’ve been on there?
"Just the same tracks as on the VOLKERMORD demo."

Why was the studio demo limited to such a small amount of copies? I mean, it’s pretty obvious that it must have cost you a little to record the tape, and I doubt that you managed to get the invested money back by only spreading 30 copies of it
"That demo was dedicated to ourselves and to close comrades not to this planet."

But a little later you agreed on a re-release through Flagellation Records, who put out that demo again under your new moniker ARMAGEDDA, using “Volkermord” as the demo title… Tell us more about the intention behind this and also some more details about Flagellation Records
"He wanted to make a re-release and I said ok, it is just that simple. The release was only for the serious people in our movement."

There was also talk about a possible CD version of it, wasn’t it? Who wanted to do that and why did it fell through in the end?
"Ask the guy of Eldritch Wizardry if you can find him. I know as much as you do in that case."

When and why did you go for the band’s name change by the way and what made you use ARMAGEDDA as your new moniker?
"Read question number two. If you ever read the Bible you would recognize Armagedda, Armagedda is a valley in Israel. A valley where Armageddon will come to pass."

The next thing you did was the split cassette “In Blackest Ruin”, which you did together with your country mates from Svarthymn. Which songs appeared on there, how many copies were made and who actually approached you with the idea of this release?
"Tracklist for "In Blackest Ruin": 1. Intro (Fire Walk With Me), 2. Horde Of Demons, 3. Whore Of God, 4. Wrapped By Darkness, 5. Pain and 6. Satan My Master (Bathory cover). This was released in I think around 60 copies by Deathcult Productions (Sweden). The reason why so few copies where spread was that DCP got problems with money and stuff. Though now Carnal Records will continue the release, and it will be available again this autumn. For more info contact Björn at Carnal Records."

I’m not quite sure about the origin of your debut album “The Final War Approaching” then – did you first of all finance / record the whole material completely on your own and Sombre Records licensed and released a limited vinyl version afterwards or was it vice versa?
"Yes, we payed for the studio to record "The Final War Approaching" by ourselves, then I sent a CDR to Opyros of Barbarian Wrath and Akhenaten heard it through him and contacted me. And we made up a deal. Sombre wasn’t in the picture at that time, they came later…"

It was just a limited edition, wasn’t it? How many copies did Sombre Records press and distribute and was that a reason why Breath Of Night / Merciless Records stepped into the picture afterwards? What actually was the reason to work with so many different companies?
"The LP was limited to 500 copies."

When did Mord join the band and what is he actually doing in ARMAGEDDA?
"He joined to play the bass, but he left the band in the end of 2001 again. "

Musically I would say you’re trying really hard to deliver Black Metal in its most purest form and I suppose that a band like DARKTHRONE was kind of responsible for your sound. Any other bands that you admire, old or new?
"Katatonia, Katharsis, Clandestine Blaze to name a few."

How about the lyrics then – most of the true Black Metal people connect this music exclusively with Satanic topics. Do you share these thoughts? Why did you only print the lyrics to three of the songs in the booklet of your CD?
"Because we don’t want to share all lyrics, some of them are very personal and can be misunderstood when small kiddies read them."

In the meantime you must have been in the studio again as a new EP entitled “Strength Through Torture” is supposed to be out through Painiac Records. Tell us a bit more about that? Which songs will be on there and so on. Is it another limited edition release?
"The "Strength Through Torture" EP came out in January 2002, limited in 300 units. It was sold out in just some weeks. The EP consists of 2 tracks. Side A: ‘A World Full Of Lies’; Side B: ‘Dödens Vind (The Wind of Death)’." 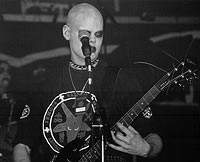 And how about this Armagedda / Woods of Infinity split EP on Sombre Records? What is that all about?
"I have no news about that now."

Unlike many of the older Black Metal bands who often refused to play life, you obviously don’t have any problems with playing live and there’s even a tour in the making with BLACK WITCHERY (USA), MANTICORE (USA) and AVENGER (Czech). So, tell us a bit more about that and why you decided to perform your music on stage as well.
"Oh yes, I have a very big problem with playing live. Because of all the people. But I have never done it and we will do this tour. It will be the only live gigs performed by Armagedda ever. How we will perform it? Well.. if you will be there you will see…" (hmm, the question actually was WHY and not HOW you will perform your music live, but what the fuck… – Frank)

Ok, I guess that’s all for now. If you’d like to add something to this interview that we might have missed out, feel free to do so now.
"Armagedda have signed to the French cult label Drakkar Productions."