This four piece outfit from Colombia is for sure no stranger to fans of brutal Death Metal. Since the band has seen its light of day in 1996 they always put out stronger releases. The first step was their “Supreme Knowledge Domain” CD which was unleashed upon mankind by Spanish underground label Qabalah Productions in 2000. A six track MCD entitled “Unmercyful Extermination” followed, thrown on the market by Macabre Mementos from Japan. After many proposals from around the globe the band decided to sign with Dutch label Displeased Records. The first fruits of their co-operation led into their second full length album “Chaotic Matrix”. This album was very well received in the worldwide underground and got excellent reviews and sales. Not to forget that it was one of the most technical, brutal and most intense albums in 2002. After many successful tours around the world this brutal horde from Colombia hit the studio again and recorded their new masterpiece in form of “Choronzonic Force Domination”. I hooked up with bass player Andres to get some more infos about this outstanding killer release…


What’s up Andres? Hope you are doing fine. Thanks for taking your time to answer this interview. First let us make a trip back into time. How did you come in touch with Metal? Are you able to remember your first bought album and what’s on your current playlist now?
"Hello Michael, thanks for getting in touch for this intie. Yeah, I still remember clearly the first albums I bought: METALLICA “Kill Em All”, SLAYER “Show No Mercy”, MEGADETH “Peace sells…” and a couple more I can’t recall now. My current playlist is: EXODUS “Bonded By Blood”, KING DIAMOND “Abigail”, KATAKLYSM “Temple Of Knowledge”, VITAL REMAINS “Dawn Of The Apocalypse”, EXCITER “HM Maniac”, DECREPIT BIRTH “…and Times Begins”, DESTRUCTION “Mad Butcher”, IRON MAIDEN “The 7th Son Of A 7th Son”, ANGEL CORPSE “The Inexorable”, PUTRID PILE “Collection Of Butchery”."

A nice playlist of some classic stuff as well as some newer, outstanding stuff. Anyway Let’s shift into overdrive and let us start talking about your new album “Choronzonic Force Domination”. I wrote in my review that it is a total killer of an album and that it is "THE" INTERNAL SUFFERING album as it convinces me in every detail for 100%. Your songs are tighter and more mature than ever before. How do you see this fact and what’s the difference between the new output and its predecessor "Chaotic Matrix"?
"Thanks a lot for the compliment and great review Michael, we really appreciate that. Well, the first difference from “Chaotic Matrix” is the production. As you may know this album was produced by Erik Rutan (HATE ETERNAL, ex-MORBID ANGEL) and was recorded at the Mana Studios in Tampa, FL. (MALEVOLENT CREATION, HATE ETERNAL, KRISIUN) so you know what to expect production-wise. The second difference are the compositions and arrangements, which are more complex and mature then before. Everything is more controlled and well placed than ever but still brutal, intense and catchy! Third and last difference are the vocal patterns which are somehow ‘clearer’, more brutal and deeper than before. As you also probably know it’s not easy to keep the listener’s attention throughout a brutal, total blasting and ultra sonic Death Metal album. So it’s important to come up with some memorable parts or slow down at the right moment."

I think you managed your task here perfectly. Do you agree with this?
"Yes, I agree with that, we pay a lot of attention when doing a new song so it keeps interesting, memorable and ever-changing without losing the intensity and brutality that dominates the album."

How big was the impact of having made excessive touring for the songwriting?
"It was pretty big as you grow and mature a lot as musician, it gives you a lot of experience and improvements as a band. That’s why touring is very important to us." 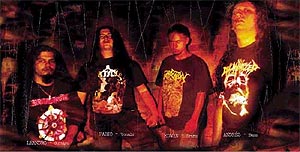 I was impressed by the great production done by Erik Rutan. It captures a real dark atmosphere and it totally shreds. In my opinion the sound of your last album was a bit ‘dry’ and ‘clinic’. How did you team up with Erik and who made the contact to him? How was it to work with him? I guess you must be very satisfied with the final result…
"Well, I always respected and admired Erik’s work since his early days in RIPPING CORPSE. So we thought it’d be a great idea to have him as a producer for our next album. We talked to Displeased Records about this possibility and they immediately were up for it. So the proper contacts were made and Erik was very enthusiastic about working with us, he said we had the potential but what we needed was a good production, you know the rest."

I know that the lyrical concept is also very important for you and is more than just to sing about something. Can you please tell our readers more about the stories behind "The God Of Chaos" or "Dweller Of The Abyss" called Choronzonic? Who has the ideas for such a concept?
"The concept behind the song ‘Summon The Gods Of Chaos’ is basically about an outer-world experience in order to summon and invoke the Chaos Gods, particularly the mighty "Choronzon". I developed the whole concept of the new album."

The cover artwork fits also perfectly to your lyrical theme. Who came up with the idea to have the cover made by Studio Sho and why? Do you think they have managed to realise the ideas?
"Since I came up with the album lyrics, I also managed to recreate the concept of the album cover. We decided to do this new cover with Studio Sho because he did our previous covers as well so he knows very well what our concept is all about and this can be confirmed by the incredible artwork they came up with."

You are signed to Dutch underground label Displeased Records. How is the work with them and are you satisfied with their support towards your band? Could there be done anything better? As far as I know they live for the music and breathe Metal.
"Working with Displeased Records has been great. We are satisfied with their support so far, some things could be better, but overall, they’ve done an amazing job. And hell yeah, they do live for Metal and have put out some amazing, cult releases!"

You moved to the United States. Even you can’t hear it anymore that someone asks you about this but why did you leave Colombia? What’s the biggest difference between these two countries? Have you ever considered to relocate to Europe?
"The move was due to the lack of good opportunities as a Death Metal band in Colombia. There’s not a lot of touring & recording chances down there, so that’s why we decided to move to the States, from here we are able to tour constantly, play Fests, tour Europe and everywhere else… Colombian scene rulz though, great support & awesome bands! The cons could be the whole culture, sometimes is pretty difficult to get used to a new way of living, you miss your country, family, friends, you know, it’s kinda difficult to deal with a new world you are not used to. Yes, we have considered relocating in Europe, we love many European countries as well and would be great to spend some months or years of our lives over there… time will tell!!" 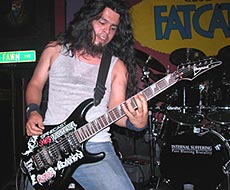 You just finished your big tour just a while ago and were able to make stopovers in many different countries. What impressions did you make on tour? Any differences between all these cultural different locations?
"Well, I think we left a very good impression in all the cities we played. People response was always great, we can’t really complain about it, I think this tour was great, just can’t wait to be back! Yeah, a lot of cultural differences between the countries, everytime we visited a new country you had to face and experience different traditions, types of food, liquors, cultural diversities, etc. It was great to meet and discover a new world everytime we crossed a border!!"

How was your relationship with the other bands on the billing?
"It was great, all the bands were very supportive and cool people to hang out with, can’t complain at all."

Are there already plans to promote the new album on another tour? Any concrete plans when you will hit the stage again? And which place would you like to tour where you have never been before?
"Well, in fact, we’ve already done several shows in North America after the new CD was released… We have plans of touring Europe and Japan next year, nothing 100% confirmed though, still working on some details. We’ll do a lot of shows and touring in North America as well so I guess it’ll be another busy year for shows and tours, hopefully. We would like to tour Australia and Japan soon, that would rule!!"

By the way there are more and more ultra brutal and extreme bands emerging from the Colombian underground like Goretrade, Carnal, Sapprofago, Nihil Obstat, Soulburner, Purulent, Carnivore Diprosopus etc. What do you think is the reason for this phenomenon? It must be one of the most brutal places on this planet! Can you recommend any other bands worth being checked out?
"Well, basically this is due to the great scene we got down there. This "movement" is mainly concentrated in the "Eje cafetero" which is the region that produces most of the coffee in Colombia, located in the middle of it. This scene has existed since the early 90s and never changed or followed any trend, always remained brutal and extreme. After the success of Colombian bands like PURULENT, GORETRADE, CARNAL, and of course INTERNAL SUFFERING, a wave of new coming bands was unleashed in the whole country, nowadays there are great bands like ANCIENT NECROPSY, NIHIL OBSTAT, SAPROFFAGO, MENTAL APRAXIA, EXTREMELY ROTTEN FLESH, PHALOGORE, DISOLUTO, BLAZE INSIDE, MINDLY ROTTEN, BLESSED SLAUGHTER, CORPSE DECAY, MEAT GRINDER, MY PLAGUE, SUPPURATION, POST MORTEM, TRAPPED IN THE MORGUE, AMPUTATED GENITALS, WORMEATEN, VAGINAL CANCER, CARNIVORE DIPROSOPUS and the list goes on!!"

And now to something completely different (to use the Monty Python phrase): you won’t be Colombian if you wouldn’t be soccer fan, would you? What’s your favourite team and best player of all time?
"Hell yeah, I’m a huge soccer fan (in fact, all Colombians are!!). Well, my favourite soccer player of all time is Pele!! And the best team should be Brazil in 1970 when they were crowned World Champions!"

Ok, that’s all for now. Thanx a lot for your patience to answer my questions. Anything you would like to add here or to tell our Voices readers?
"Thanks a lot for the interesting interview Michael. Also, thanks a lot to all of you reading this intie… be sure to visit our website www.internalsuffering.com, feel free to email us your comments or contact us at info@internalsuffering.com. Can’t wait to be back in Europe next year, hope to see you guys over there!!"