In 1997 Swedish Death Metal was heavily lacking in what it once stood for: HM2 buzzsaw sounds, Sunlight recordings and most of it all, good releases. Sweden’s big four were nearly at the bottom of their career. ENTOMBED rode on with the Death’n’Roll train, UNLEASHED fought a hard fight with the "Warrior", GRAVE suffered from the loss of Mr. Sandström and also DISMEMBER had seen better days, though "Death Metal" wasn’t that bad at all. So, there were some guys that thought it was about time to bring the North back on the map, with their own interpretation of sheer aggression and brutality. Back then Grindhead Anders Jakobsson was kind enough to introduce me to the world of NASUM. The interview remained unreleased until now, so here we go after all!!

First of I’d like to know a little bit about the third member of NASUM. Most of our readers might already know you and Rickard (Alriksson – drums and lead vocals) from your former band NECRONY (R.I.P.).
"First of all: there is no third member in NASUM, because Rickard is no longer in the band. The correct line-up is: Mieszko Talarczyk – guitars / vox and Anders Jakobs – drums / bass / vox. So, what do you want to know about Mieszko? He is born on the day before Christmas 1974 and he‘s a vegan. He also plays the guitar and sings in the Crust band GENOCIDE SS together with Rickard (bass / vox) and the originnal NECRONY guitar player Dan Wall (drums). Check them out if you are into Crustcore. If you want to hear more of Rickard, check out his solo band HELLCHAMBER and the yet unnamed band which consists of the last NECRONY line-up, except me. I hope NASUM can do without the comparisons with NECRONY now, because it’s been quite annoying."

Now that your first MCD "Industrislaven" has been released through Poserslaughter Records, are you still satisfied with the result? 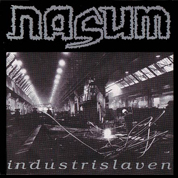 "It´s quite ok I think. Unfortunately there have been a lot of mistakes from the record labels’ side that we wished we could have been without. For example the cover picture should have been printed over the whole page (why it ended up so small, I haven´t got a clue) and the songs ‘Mer Rens’ and ‘Ditt Öde’ have been put together so that the numbers in the display were wrong. The slow outro song ‘Söndermald’ should have been number 18 and the insane reprise of ‘Revolution’ should not have been a song of its own. But musically it’s ok!"

Hence the fact, that except for four songs, the rest has been written in your native language and NASUM being a Grindcore band, I presume that your lyrics have some kind of political background. Please comment on that guess of me.
"All our lyrics are political, whether it’s written in Swedish or in English. The reason why we wrote some lyrics in Swedish is because we wanted to pay tribute to the old Swedish bands like MOB 47, G-ANX and FILTHY CHRISTIANS, who expressed themselves in Swedish. Unfortunately it’s really hard to write good lyrics in Swedish, so it was quite a time since I wrote something. On an upcoming French compilation LP / CD that we will participate in, we must sing in Swedish and that will be both cool and challenging!"

When I studied your discography, I just saw that you already released a split 7" with PSYCHO, a 14 track demo called "Domedagen", another split with AGATHOCLES and that you appeared on a Hardcore compilation and also on that three-way split MCD called "Grindwork". After all these releases, what are your plans for the future?
"We recorded 24 tracks with the new line-up in November last year. 8 of these will be on a split 7" with CORNBEEF that Yellow Dog (Berlin) should release any day now. The split 7" is calles "The Black Illusions". The other 16 tracks will be released as a "full" 7" on Blurred Records (Japan) under the name "World In Turmoil". Check this out! In June we will hit the studio again to record a bunch of new songs for a Finnish Grindcore compilation CD. Later this year we will records 6 G-ANX covers for a tribute 7" we will release through Swedish Distortion Records. We will also record a DISCHARGE cover for a Swedish tribute CD that the same label is gonna release. We might appear on the French LP / CD I already mentioned earlier and probably do a MCD or something for Relapse Records. After that – who knows?"

Do you still have the connection to the Swedish Death Metal scene, like you had with NECRONY? And what do you think about the future of that scene?
"No, not the same kind of contact as I had before the break-up with NECRONY. I still have some friends I write with / talk to, but I haven’t got a clue about new bands and new trends. About the scene’s future: I think it’s been quite a while since something interesting happened in the scene and I hope something good will happen soon." 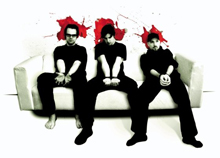 Well, I already asked about your opinion concerning the actual Death Metal scene, so what do you think about the current Black Metal movement with their sometimes facistic point of view? Would you agree with people saying it’s only a fashion flow or does it have to be taken more serious?
"I don’t really listen to Black Metal, but I can enjoy some bands like IMMORTAL (although the latest album is a bit disappointing)! I think it’s pretty natural that such violent music has violent opinions / attitudes, but I don’t like it. I think it’s important to know what bands use the opinions as an image and which use it for real."

But back again to our main theme. When I look at the cover of your MCD "Industrislaven", it looks like a huge factory or an industry-building. Would you be so kind and explain what this picture should express? 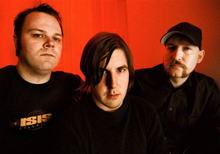 At the beginning I already described your style as Grindcore. So, how would you chracterise your style?
"I would say that Grindcore is the ultimate description of NASUM! We may have Metal sounds but we have Hardcore attitudes."

Most bands praise some old school bands as their main influences. What about you? I guess you have such influences, too? For example acts like REPULSION or even perhaps DEFECATION? 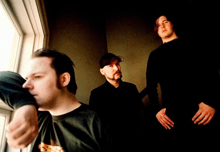 "It’s hard for us to pick up any inspiration from new bands since there are hardly any "new" bands. That should maybe be ASSÜCK and DROP DEAD, they are probably the "newest" inspirations. Otherwise it’s only old stuff like old NAPALM DEATH, G-ANX, MOB 47, TERRORIZER and some others. As for the bands you mentioned; yes, REPULSION is a big inspiration (look out for a new track called ‘Zombie Society´on the "World In Turmoil" EP – it’s very REPULSION – inspired!) but DEFECATION has never been a source of inspiration."

Have you ever thought of becoming a four-piece? Mieszko handles both the guitar and bass, so I can imagine it would be way more easy to have a fourth member, especially for live gigs.
"It would be great to be a three-piece or a four-piece, but at the moment we have the ultimate line-up. Mieszko and I have played together this way (me playing the drums and he the guitars, that is) every week for the last couple of years in different bands and projects and we know each other inside-out, musically. This way a new song can be extremely tight the first time we play it! It’s almost scaring how we play together! So when it comes to creating new songs this is the ultimate way, but in a live situation it sucks! I´m really not so much into playing live, but maybe I change. I think we have a friend that can help us out live playing the bass. He’s not really a Grind guy, but he’s a very good musician, so it can work out! We don’t know yet."

Last but not least, please tell us something about yourself, the rest of the band, tour activities and your aims for the future.

"What is left to say? I have a new demo out with a band called BLOODSHED. I play the drums and sing and some other guys play the rest. It’s total old school Death Metal with some modern harmonies in it as well. If someone wants this three-track demo, just send a blank tape + 2 IRCs. NASUM may do some gigs in Sweden this Summer, we don’t know yet. And if it works out we try to arrange something in Europe as well. We will of course record new stuff as soon as possible and maybe we’ll do a full-length CD by the end of the year, we don’t know yet. And our aim for the future is to keep the Grindcore scene alive!"

OK, that’s all folks! Thanks alot! Anything else you would like to say?
"Thanks for the interview and good luck with the zine. I’m open for correspondence as long as there’s an IRC in the envelope. So feel free to write me. Order our records and stuff! Also look out for a brutal NASUM homepage on the internet some time during this summer! Stay well / Anders."