Some of you probably read the first SINOATH interview I did a few months ago; here we have a second one. Whereas the first one was answered from Salvatore which is the founding member and drummer on SINOATH’s first demotape "Forged In Blood" and the recently released new CD "Under The Ashes" (read the review in the review section) this second part was answered by Dario which was SINOATH’s drummer on their second demo "Still In The Grey Dying". As I consider "Still In The Grey Dying" (as well as "Forged In Blood") to be one of the best demos ever recorded I think it was time to talk about this part of the history of SINOATH, too. Enjoy!


Hello Dario, how are you? Anything important to say to start this interview?
"Fine, thanks! It’s a nice thing to speak about SINOATH and the old times for me."

Have you ever heard of www.voicesfromthedarkside.de? What do you think about this online magazine?
"Yes, of course. I think it’s a really good webmagazine."

How does it feel to get interviewed about your band SINOATH, mainly because of nostalgically reasons? I mean, I know SINOATH now for 16 years
"Strange feeling. I remember that period like the darkest times of my life, not only in the negative sense, of course. It’s a pleasure for me to answer about the music and the SINOATH lifestyle."

By the way, is this the first SINOATH interview you are answering?
"Absolutely not! I was in contact with many bands and fanzines, so this will be the 100th interview…"

You joined SINOATH before their 2nd demo. Were you a session member or a full member back then? Reading the booklet of “Still In The Grey Dying” I could see that you were involved in the songwriting process or at least contributed some lyrics. How serious did you take SINOATH?
"SINOATH was my life in the early 90s; before I was a great fan ("Forged In Blood" changed my musical existence), then I became a full member and I have participated in the composition, arrangements and writing lyrics for "Still In The Grey Dying". Under the flame of SINOATH I’ve walked the path of the occult life-style and many many others things…"

Looking back now, what is your personal opinion about SINOATH’s 2nd demo?
"I hate the too fucking long arrangements! But I absolutely love the music and the sensation when I hear it. Those evil songs were the manifestation of our dark subconscious of that time. Really great for me until now." (totally agree here – Thomas)

What do you think about “Forged In Blood”? SINOATH name got a great reputation with this one and even increased it with the 2nd demo.
“Forged In Blood” was one of the most important demos of the 90s. It sounds killer even in the year 2008 to my opinion…" (totally agree here, part II – Thomas)

The sound changed a lot from the 1st to the 2nd demo, especially the sound was more professional and technically SINOATH improved a lot. What do you see as the major difference between the first and the 2nd demo. Which is your favourite?
"The first demo was rawer than “Still In The Grey Dying”, but I love both of them. Maybe the last one was more atmospheric and darker than the first one."

The songs turned out quite long this time. Did you have so many ideas to cover in one song and what’s the reason for this instrumental? Was it planned this way or didn’t you have a vocalist or lyrics written?
"They turned too fuckin’ long! (ahahahah) We wanted to write an instrumental of pure decadence and pain without words and based only on cries and screams of the still souls that live in post mortem desperation." 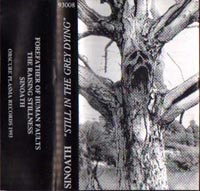 Could you please comment each song of this demo? All masterpieces from my point of view… ‘Forefather Of Human Faults’, ‘The Raising Stillness’, ‘Sinoath’…
"Ok, let’s start: ‘Forefather Of Human Faults’ was inspired by the mythological figure of Cerberus and we have tried to join music and lyrics in the best way. I adore the incipit of the song that rise from the silence and open the gates of the underworld… ‘The Raising Stillness’: absolutely united with the demo’s cover. The souls of all sinners reborn in the trees of hell and screaming all their sorrow and pain. The original title was ‘Kingdom Of Desolation’ and some riffs were composed by Salvo Fichera, if I don’t mistake. ‘Sinoath’: for me the best SINOATH song ever. It’s the perfect picture of an oath with sin."

On the CD version of "Still In The Grey Dying" there is the following sentence printed in the booklet: "A brutal fuck off from Dario to: All people that have played in SINOATH, and to the falsity of the untrue music". This sounds to me as you got some internal problems with the former members? What happened??
"Yes, that sentence was against some member’s bad attitude. Someone wanted to deny the undertaken dark path estranging him from the unholy union of the band. But now, after many years, we are still great friends."

As far as I know Obscure Plasma Records / Avantgarde Music took care of the distribution of your 2nd demo. Was there some kind of arrangement and how many copies did you sell?
"Sorry but I don’t remember…"

By the way, did you play live a lot? With which bands did you share the stage?
"We rarely played live, but I remember a beautiful and occult night together with CATACOMB (now NOVEMBRE) and ICONOCLAST in Modena (1992). It was a magic live and the hall was full of people. They sang ‘Witch Bleed On Fire’…"

Your main band was and is SCHIZO. Please take the opportunity to tell the readers some words about this band. SCHIZO can be considered as cult act, too, if you ask me. But I have to admit I hardly know any recording from this band
"SCHIZO were the prime movers of the extreme Italian scene together DEATH SS, BULLDOZER and NECRODEATH. Visit our www.myspace.com/schizoxxx."

What about the scene back then in Italy? I wasn’t aware of so many bands from Italy, just MORTUARY DRAPE, DEATH SS, SCHIZO, SADIST or ICONOCLAST (where you took their singer Andrea for “Still In The Grey Dying”).
"In Italy there was a great scene and fantastic bands but was too much difficult to get the money for a good production and a good promotion. I don’t know why but many labels snobbed Italian bands in those times."

What do you think was the reason why SINOATH didn’t get the chance to release an album after two such great demos? Back then it shouldn’t be a problem during this Death Metal boom and you were one of the best bands anyway.
"I think for the same reason… unfortunately. We had the respect of many bands (SAMAEL, ROTTING CHRIST, IMPALED NAZARENE, MOONSPELL, BURZUM…) but no label offered us a deal…"

Why and when exactly did you leave SINOATH?
"For some problems with line-up."

What do you think is the reason for the line-up problems SINOATH had to deal with all the time?
"An accursed band, maybe."

Later on SINOATH released the CD “Research” which is a rather strange release. I mean, no songs from two of the greatest demos ever released were included on it and the line-up consisted of almost new persons. What happened to SINOATH and what’s your opinion about this CD? Why didn’t they use these old classics?
"I would not know how to answer because I was not in the band. Dark magic was perhaps ended of once, maybe. "Research" was a good album but too different from the dark musical landscapes of the early SINOATH. In my opinion, of course…" 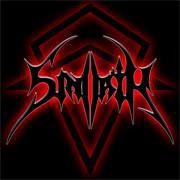 I guess you know that SINOATH reformed with its original drummer Salvatore? What do you think about that and are you in any way involved in it?
"Yes, I know it! I’m not involved in it but I’m very happy about this rebirth, making the best wishes to Salvo and SINOATH for this new run. Unfortunately Roberto Messina doesn’t live here anymore. He’s the perfect guitar-player of SINOATH."

SINOATH have released the album “Under The Ashes” in November 2007. What do you think about that?
"Good work, I really appreciated this new album."

Did you have a look at the official myspace-site for SINOATH already?
"Yes!"

Do you still have contact to the old guys from SINOATH? What are they up to?
"Of course. Roberto and Andrea Zanetti are great friends of mine, Seby lives in Berlin from the "Still In The Grey Dying" times and he play with some bands. I don’t know about the other old members…"

Have you ever heard of the radio show “DarknessDescends” on www.solarfall.com? This is show dedicated mainly to the Death Metal underground of the late 80s and early 90s and the DJ Ola Sjoberg already played some old SINOATH tunes. What is your opinion about the glorification of the Death Metal scene of the early nineties with shows like this? Even with interviews like this?
"Fuckin’ great! This is true passion and I’m honoured."

Well Dario, that’s it for this time. I’m running out of questions so I’m not able to bore you any longer. Thanks for the time you spent for answering my questions. Any last words?
"Thanks Thomas, you’re a great guy and I hope that you have appreciated this interview. Thanks for the chance to remember these old good times."