E-Mail interviews not always get you the expected result… Even though there’s several bands out there who really seem to dig this form of communication / promotion and therefore deliver really lengthy and in depth answers, there’s others that didn’t seem to care too much. Unfortunately Ainvar Ara, guitarist of Portugal’s biggest Black Metal hopefuls SIRIUS belongs to the second category, so that this feature turned out a lot shorter than originally planned…


When and how did you get hooked to Heavy Metal in general? Was it through a concert, a record or a friend…?
“I started listening to Heavy Metal when I was really young, when I was around 9/10 years old. My older brother had some friends into Metal who lended me some tapes and LP’s.”

And BLACK METAL in particular?
“Well, if you consider BATHORY, POSSESSED or CELTIC FROST as Black Metal, then it was about 12/13 years ago, but knowing the real meaning of Black Metal and standing for it, it was only in 93 when I got access to the first Scandinavian wave of Black Metal.“

Where you come from: is there a scene for extreme Heavy Metal around, can you play concerts with other bands there?
“Yes there’s a scene, but I’m not very involved into it. SIRIUS did some gigs in ‘99 and last year with many Portuguese bands.”

Are there any bands we don’t know yet but who should be supported? What are they like?
“Concerning Black Metal there are some new bands which are quite good like CORPUS CHRISTII and FLAGELLUM DEI (both of them play traditional grim Black Metal). Concerning Death Metal there are some bands from which I will refer HOLOCAUSTO CANNIBAL which is one of the best live acts in Portugal.”

I heard that on your next album you want to put the keyboards even more to the background. Concerning your sound I think it was a good move from your debut album to "Spectral Transition…" but don’t you think this measure might affect your very original sound too much?
“This album represents SIRIUS, the new sound isn’t done yet, but I think it won’t be synth orientated at all (more industrial probably), but our sound will still be OUR sound.”

Do you watch many science-fiction movies at home?
“Not that much.”

What do you read?
“Mostly modern literature and books related to psychology and philosophy.”

How did you manage to make these famous guest musicians contribute to your new album?
“Well, Faust was the only one confirmed. We met him when we where in Norway mixing “Aeons Of Magick”, and he has supported us a lot since then. There was the opportunity for him to participate and he accepted it, which is an honour since it’s his first appearance since “In the Nightside Eclipse”. Daemon, we also met last year, and this time he went to the studio to check out the sound. The same night after some beers we all thought his vocals would make the album better and it was decided he would join us in the studio the week after. When we decided to record the cover of ‘Majesty Of The Nightskies’, Samoth was the man to join us. Both his participation and Faust’s in this track are a kind of a tribute to them, the real Emperors.”

What was it like to play with them?
“It was really good. They acted in a very professional way and gave their personal contribute to the tracks they participated in.” 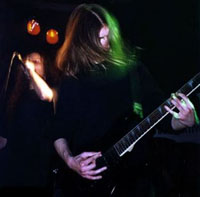 What does it mean to you:
a) writing songs

“It’s the best form of expression for me.”
b) recording them
“Gotta do it, so I can listen to the music with its full power.”
c) playing live
“Honestly speaking it doesn’t mean much to me.”


What can people expect from a SIRIUS concert? Any special effects? Or is it "just" the music?
“If we perform live, since there’s no gig schedule, it will be a traditional concert since nobody has the money to let us produce a proper concert.”

I guess you can’t make a living from SIRIUS. What does everybody in the band do in order to earn money?
“Well, I’m studying in university, the rest of the band has regular full time jobs, except Draconiis who works as a free-lancer so he can dedicate as much time as possible to SIRIUS.”

What are the lyrics on “Spectral…” all about? Can you explain the lyrics of each song briefly (maybe in combination with the music) for people who don’t have the lyrics or who even don’t have the album yet?
“The lyrics are all around a general concept based on a transition from the tridimensional world we live in into higher states of transcendency, each track being one of those spectral levels (all in a metaphorical sense). Since most of them weren’t written by me, it’s a bit unfair to describe them, so I won’t do it.”

Are you going to tour (in Germany / Europe…) for "Spectral…"?
“Probably not, it seems the tour promoters are more interested in promoting the big bands and treat the new ones like their dogs, delivering shitty conditions, high probability of a lousy sound so the big ones can shine. And since we don’t want to tour just for holidays, but to deliver a slab of true extreme Metal we will probably stay in Portugal. It’s a shame cause people from other countries won’t see us live, but we don’t go along with this kind of exploitation.”

Do you have any funny or interesting stories to tell about SIRIUS, for example from a gig?
“Nothing really interesting happened at our gigs apart from the usual stress and organizational problems of every gig.”

Any last words?
“Thanx for this interview, which was a bit different from the usual ones. And support the bands, not the ones who are earning easy money from the exploitation of Metal, without the bands they are nothing, remember that."