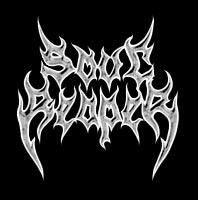 Sweden’s brutal Death Metal horde SOULREAPER has finally returned to the scene with their second full length album "Life Erazer", which definitely has become a worthy follow-up to the band’s Nuclear Blast debut "Written In Blood". Unfortunately the high quality of the music doesn’t exactly go hand in hand with the way how bassplayer Mikael Lång handles his interviews. The following questionaire originally was supposed to be a lot longer, but as mister Lång decided not to answer some of our DISSECTION related stuff, or simply replied with "no comment", he left an impression of being a pretty arrogant fellow who’s generally lacking in the necessary dedication. But what the fuck – here’s the result anyway…

Everyone probably knows about the fact that Johan and Tobias previously used to be in DISSECTION until Jon Nödtveidt’s imprisonment put the band on hold for a uncertain period of time. So, when and how did all you guys get together and what have the other members been up to previously? 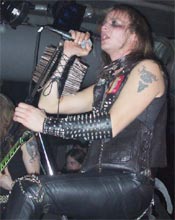 "Johan Norman, Tobias Kellgren, Mattias Eliasson and I (Mikael Lång) started Soulreaper together in October 1997. After a while vocalist Cristoffer Hjerten joined us. Johan and Tobias had earlier played with bands like Decameron and Dissection. Mattias came from bands like Swordmaster and Sarcastic. I had a Doom / Death band called Lachrymatory."

Mattias didn’t stay in the band for too long though – so what had caused this split and how did you get together with Christoffer Hermansson as his replacement? Has he been playing in any band before already?
"Mattias had to leave the band due to personal problems. Johan and Tobias had known Cristoffer Hermansson for quite some years before he joined Soulreaper. Cristoffer left Soulreaper after the recording of "Written In Blood". Later he founded, together with our drummer Tobias, a Heavy Metal band called Seventh One."

As far as I can recall you originally named the band just REAPER and even recorded a demo under that name – so, what was the reason to change it into SOULREAPER shortly after?
"The name Reaper was already taken."

Tell us a bit more about that demo… Which songs appeared on it, was it all brand new stuff or did you also use ideas that originally would have ended up in DISSECTION?
"We recorded one demo in late 1997, and one in the beginning of 1998. The tracks were early versions of ‘Written In Blood’, ‘Labyrinth Of The Deathlord’ and ‘Subterreanean Might’. It was all brand new stuff." 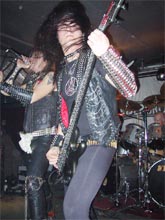 Musically SOULREAPER definitely sounded a lot more brutal and MORBID ANGEL inspired than DISSECTION ever did, so was that some of the influences that the new members brought in?
"Remember that Soulreaper was founded by the four of us, not by the two ex – Dissection members. It was obvious from the beginning that Soulreaper would be an extreme Death Metal act."

Did Nuclear Blast have an exclusive option to release new material of you guys or how did it happen that SOULREAPER ended up being signed to them as well pretty quickly?
"Nuclear Blast was not the only record label interested in us after hearing the demo. There were several others. Nuclear Blast just offered the best deal."

Your debut album "Written In Blood" also featured the old SATANIZED track ‘Satanized’, which was already recorded and released by DECAMERON on their one and only album "My Shadow…" a couple of years ago. What made you go for it as well?
"’Satanized’ is a very strong song written by Norman, Hermansson and Nödtveit many years ago, but we thought that the earlier recordings of it never gave the song its rightful aggressiveness. So we recorded it again for the "Written In Blood" album and managed to create the most brutal version of it ever." 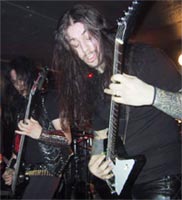 "Written In Blood" was recorded at a studio named Gain Productions in Gothenburg, which I’ve never heard of before, so how did you end up recording there and what can you tell us about the engineer "Dikk Tator", which most certainly was not his real name…
"There was a cousin of mine that mentioned Dikk Tator and Gain Productions. We recorded an early version of ‘Ungodly’ with Dikk Tator as the sound engineer in the Gain Productions studio. We thought that the result of the recording was great so we decided to record the whole album there." (which is not exactly the complete answer to my question – Frank)

Why did Christoffer leave the band after the recordings and when and how did you find Stefan Karlsson, who replaced him? What has Stefan been up to previously?
"Cristoffer Hermansson had to leave the band due to personal matters and interests. Stefan Karlsson had been a friend of ours for some years when joined Soulreaper in the summer of 1999. He has been a member of a band called Brutaliator for twelve years or something, and he still is besides Soulreaper." 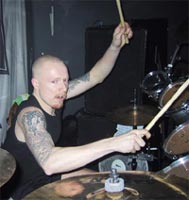 Did you get enough opportunities to promote the album properly (through live shows, interviews etc.) or would you say that Nuclear Blast could’ve done a lot better at the time? Do you think they really believed in the band in the same way as they did in DISSECTION?
"We did 70-80 interviews and 30-40 liveshows to support "Written In Blood", but Nuclear Blast never believed in the band and stopped the printing of the album after 10000 copies or something. I think they wanted us to play a little more Black Metal with catchy melodies."

Tell us a bit more about your live activities – any cool shows that you played in support of the album?
"Soulreaper has always been a powerful and professional live act. We have grown even stronger now, that I think you will see on our forthcoming "Life Erazer" shows."

I saw a bunch of life pics from various shows and noticed that you were going for a total oldschool Black / Death Metal outfit as well (black clothes, spikes, leather, bullet belts) and that Christoffer even used a little bit of corpsepaint… So, how important is the visual side of the band for you? Could you imagine to "out-grow" those elements someday and to go on stage with jeans and t-shirts exclusively then? 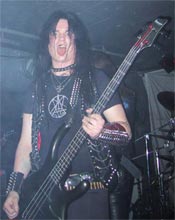 "I don’t think that the visual performance is that important. We just enter the stage dressed in outfits that we feel comfortable and fits to the music and our personalities. We will never do a liveshow with shortpants etc, like a fucking grungeband or something."

What exactly were the reasons to part ways with Nuclear Blast and when did you sign with Hammerheart Records? Any other labels that you considered signing to, besides them at the time?
"Our previous record label Nuclear Blast has become a quite big label nowadays, and we felt like we didn’t get to much attention being signed there. We signed to Hammerheart Records in the beginning of 2002, and I think it will work out a lot better."

The first release through Hammerheart was the "Son Of The Dead" 7"EP, which came out in 2002 and (as far as I know) features demo versions of songs that now also ended up on "Life Erazer", re-recorded. Who came up with the idea for that 7" and did you demo the entire album material previously or just those songs that ended up on the EP?
"The idea for the "Son Of The Dead" 7" was both ours and Hammerheart’s. We did not demo the whole album material, just four songs." 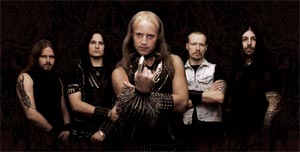 "Life Erazer" was recorded at Los Angered Studio and produced by Andy LaRocque of KING DIAMOND this time. So, would you say that it is a big step forward for the band? How big was Andy’s influence / input on the material?
"It was a very good experience to work with Andy. He is an excellent sound engineer and he has most definitely got a feeling for extreme Death Metal, at least he told me, when it’s well performed."

The new coverartwork was supplied by Kristian Wahlin this time and the original logo art (courtesy of Nicklas Rudolfsson) was also changed… who suggested these things? Weren’t you satisfied with the packaging of "Written In Blood"?
"The cover artwork for "Written In Blood" was alright, but we felt that we needed a new bandlogo that fitted our music more. We were never really satisfied with the old one."

Would you agree that you have incorporated a lot more melodies in the songwriting this time? It somehow seems to me that you returned to your musical roots with "Life Erazer" a lot more again, as opposed to just putting out a typical US Death Metal style album… Kinda like MORBID ANGEL meets DISSECTION – was that something you wanted to achieve or did that more or less happen "by accident"?
"We have reached a much more personal style of Death Metal with "Life Erazer". It is still very brutal, but the arrangements and the performance on "Life Erazer" are far better than its ancestor. The fast parts are much faster and the heavy parts are even more heavier."

I was also pretty surprised to hear Christoffer using his clean voice in some of the songs… I actually didn’t expect something like that from you guys as the original intention of SOULREAPER was to become more brutal, wasn’t it?
"It is not Cristoffer Hjertens voice that you hear on ‘Static Darkness’ and ‘Pain Within’, it is the voice of Thomas "Offensor" Eriksson, that used to play drums with Grotesque." (oops…that’s the way it goes if interviews are done before the actual album release, without all the necessary backing info – Frank)

You also did a very impressive cover of MORBID ANGEL’s ‘Fall From Grace’ – did you record that in the same session? Was that originally meant for the MORBID ANGEL tribute album exclusively or was it clear that you would also use it on a SOULREAPER release as well somehow?

"The ‘Fall From Grace’ cover was recorded in November 2000. It was originally meant for the Morbid Angel tribute exclusively, but now it appears on the limited edition digi-cd of "Life Erazer" as well."

It seems that Jon Nödtveidt isn’t really impressed by what you guys are doing these days as he talks very negatively about all of his former band members… Does that bother you in any way? Have you ever talked to him personally ever since he is in jail? What do you think is the reason for him, acting like this nowadays?
"No comment."

What can you already tell us about the forthcoming "Godless Reaper Of Souls" MCD, which is scheduled for a September 01 release through Hammerheart? What kind of material will be featured on it and what is the general purpose of that MCD?
"No comment." (that’s what I call a pretty stupid attitude, my "friend"! – Frank)

Anything else we might have forgotten to mention? Is there a tour coming up or anything? The last words are yours. All the best.
"We have an European tour coming up in November with either The Crown or Dismember. Watch out for the life erazing Death of Soulreaper. See you on tour."