Beware this is a story of an impious sacrilege made in Sweden! VERMINOUS are heading from a small town called Ahus and I guess no one would expect an immense and deadly dose of pure oldschool Death Metal from a bunch of sickheads at the age of early 20s. But to hell, those young dudes kick some serious ass like the old ones did in the very early 90s. I guess if you love the old GROTESQUE material, the dirty tunes of AUTOPSY and the darkness of very early MORBID ANGEL then VERMINOUS could probably fit very well to your collection. This band is probably like a twin band to their landmates KAAMOS, so you know what the hell will wreck your ears. We were so kind and tortured drummer Agge with some nice questions…

Cheerz Agge – what’s up in Ahus? How many oldschool Death Metal attacks have survived your ears today until you started to mutilate this interview and have you seen any old horror movies recently that you’d like to steal some intros from for the next album!?!
"Hailz Ralf!!!! It’s great in Åhus right now, great weather and stuff. Hmmm, I just woke up when I started on this interview but now I’m listening to the new DISMEMBER album “Where Iron Crosses Grow”… It’s a great album, but I hate the melodic solo shit in one of the songs. About the horror movies, yesterday I watched “Masque Of The Red Death” from 1964, it’s the movie that ENTOMBED sampled “There is no other god, satan killed him” and some more, pretty cool!"

"Impiuous Sacrilege" got 9/10 points in MYSTICAL MUSIC # 8 and for me it was definitely one of the ten best underground releases from 2003. But nowadays nearly a year has passed, so what about the reactions, especially when we mention the fact that your absolutely aggressive oldschool attack is controversial and not everybody’s darling, or what would you say? What do you think about the press reactions and do you sometimes complain that some writer don’t have a clue what your intention is?
"Thanx for the support!!! I’m very satisfied with the results on the first album! Nothing more to say really, I’m more than satisfied that people in the underground like it so much and all the great support we got from many people!"

It’s hard to say, but your music is fucking evil and it definitely gives me the vibe which I had with albums like MORBID ANGEL’s "Altars of Madness", the SADISTIC INTENT stuff, GROTESQUE’s "In The…", a piece of old AUTOPSY and thrashier sides like DEADHEAD as well. What do you think about that and what kind of visions are lying there in your mind when it comes to the creation of VERMINOUS? Do you feel like doing a revival of these old bands and doing something darker than many black and white pinguin clones, ha!?! 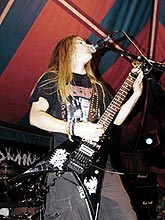 "I think that rules, I mean all the bands you mention are awesome… And of course we get alot of inspiration from them but we want it to go faster and with more aggression! When we create the music, I don’t know what’s on our mind, but we are working harder on the new songs than we have ever done before and I think its getting better…"

What kind of relationship do you have with KAAMOS and what do you think when people start to compare both bands? I mean obviously you seem to have similar basic influences and also visions, just for example your album layout and artworks are also total in these late 80s / ealrly 90s spirit, which means outstanding, but defintely nothing impressive for the modern oriented digital designed freak, hope you know what I mean…
"Ok, Pelle is the brother of the KAAMOS drummer (Chris Piss). And our covers are drawn by the same guy, called Timo Ketola. He is awesome, he is the creator of our logos and everything and as long as he is willing to do our stuff he is the only one who will do it… just perfect!" 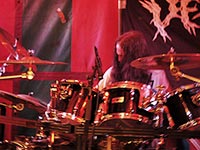 VERMINOUS is really an oustanding act among all the Xtreem Music signings, cause you differ a lot from this dose of immense American Death / Grind influenced bands. How do you feel about Dave Rotten’s work so far? Have you got some sale figures and do you feel comfortable with having somebody with a long time scene experience behind the back? Be honest, what do you expect more from the next album?
"Dave is totally awesome… I don’t know how many copies of the album we have sold, but it looks good… We don’t expect anything for the next album, we are just going to do our best, but it would be awesome to come to other countries and do some gigs…"

VERMINOUS sounds absolutely authentic oldschool to me, but when I look at your pictures you seem to be a bunch of really young Swedish lunatics, or how is the average age of the band? You also seem to be absolutely into collecting cool bootleg shirts of old bands, ha! Aren’t you? Tell us some crazy and sick memories of parties and gigs with your bandmates…

"Well we are young… Me, Linkan and Simon are 20 years old and Pelle is 21… Hehe, I think all of the t-shirts we wear on the latest band pics we bought at Wacken 2003 and the week after Wacken we did the latest band shot. We have done lots of sick things, but you know you don’t remember them the day after, haha. Hmmmm, what can I tell you, when we got drunk this winter we all woke up with our bodies hurting so much because we had played amercian football with a beer can for some hours on frozen grass outside the pub… The sick stuff I save for you when we meet hehe…" 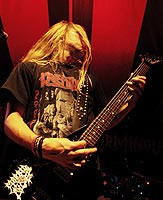 Talking about oldschool Death Metal: what do you think about these sort of allstar projects like BLOODBATH or RIBSPREADER? To me they are musically fantastic, but I know that a lot of people complain that there’s also just a kind of money business behind such releases, espcially with the fact that it is easy for labels to do the marketing with big names like Dan Swanö etc. You know, their names are sales arguments, or what would you say?
"I don’t really care about it. I don’t think Dan Swanö makes a lot of money on it, but of course it’s easy for the labels…"

Talking about your bandnames: you’ve started under the name DELVE and you even did a demo and a MCD as well before you’ve changed into VERMINOUS. Was there actually also a change of style and vison concerning music and concept? I guess not many readers are familar with the DELVE stuff, so what have they missed? 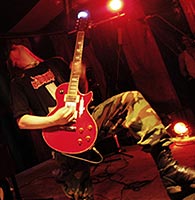 "We didn’t start as DELVE, we started out as VERMINOUS! Me and Linkan are members from DELVE and when DELVE was dead we started a new band together with Pelle, and later we named the blasphemic orchestra to VERMINOUS. The readers haven’t missed a thing if they have the “Impious Sacrilege” album and “Smell The Birth Of Death” EP… We started DELVE when we were about 14 years old and I don’t think you wanna hear that stuff, haha!" (hey, c’mon – "The Dead Amongst" is a pretty cool release!!! – Frank)

Have you already sent a Spanish written love letter to your name brothers of VERMINOUS from Spain? Are you in contact with these dudes? I mean they’re into Death / Grind, but it’s always confusing to have two bands with the same name, or what would you say?
"Yeah, we already told them that we love them and we are going to change our name just because of them, haha. I don’t care about them. They emailed us about two years ago if we could change our website address from verminous.com to verminous-sweden.com… Never! And there is about 3 other bands called VERMINOUS, one lives about one hour from us. I think we have to visit their home or something, haha."

Ok, Agge now you have to go through our god damned comment game, so what comes to your mind when you read the following points: 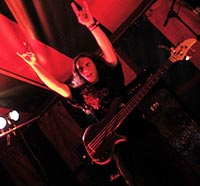 
Is there any country from which you get the best reactions on "Impious Sacrilege" so far or any fave were you defintely would like to play? I think a tourpackage with NECROPHOBIC, MERCILESS, KAAMOS and VERMINOUS would be an ultimate oldschool showdown, or what would you say? Do you have any dreams with the band?
"I think Greece would be awesome to play in because we have a lot of friends down there, but of course we wanna play everywere! That tourpackage would be awesome but it will never happen anyway, haha. Maybe VERMINOUS and KAAMOS will happen, and that would be totally awesome! The dream is to play everywere but it’s not possible, I think!"

A real oldschool maniac is also into fucking vinyl, so I guess it has been like an orgasm to you when MERCILESS records agreed on doing a vinyl version of the album, or what actually happened? Tell us a bit about your collection? Do you have any really special rare or fave items and what about your faves from Germany? 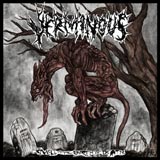 "Merciless Records isn’t going to release it because they noticed they got too much to do and then we would have to wait for long. But the new label Blood Harvest Records in Sweden (who also released the excellent NECROVATION 7" – Frank) is going to release the vinyl version of "Impious Sacrilege" and maybe a 7” before the next album. When I was younger I bought everything by ENTOMBED that I could get my hands on. I got all the NIHILIST stuff and almost everything related to ENTOMBED except HELLACOPTERS. The faves from Germany… hehe, of course it’s KREATOR and SODOM!!!!" 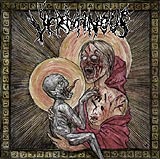 What can you tell us about the upcoming second album "The Keeper Of Chaos"? Will Xtreem Music give you a bigger studio budget than 7 days and what would you say are the strongest sides of the upcoming material?
"The next album is in the working process and the title has been changed from “The Keeper Of Chaos” to another name but not for sure yet so I’m not telling you yet. But when you will see the front cover and the title you will understand, hehe… We are going to do a known Christian painting this time too. The first album is the Madonna holding her stupid child, and this time Jesus is a bit older, hehe… We have 5 songs completed for the next album and we have about 4 more to do…"

Thanx a lot Agge for being so kind to answer all these questions… Hope to see you dudes live in Germany as soon as possible. Would be also cool to have some beers together… Good luck!!! Feel free to give some evil commands or just some nice final salutes to our readers…
"Thanx so fucking much for the support and this interview!!! And when we come to Germany we will get drunk together!!! See you all in Deutschland!!! BLASPHEMY REIGNS SUPREME!!!!"