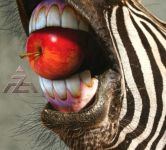 A-Z (pronounced “A through Z”) seems to be a rather strange name for a band at first, but you’ll quickly get its actual meaning, when you discover that it represents the two better known musicians involved in this project, Ray Alder (vocals, FATES WARNING) and Mark Zonder (drums, WARLORD, ex – FATES WARNING). The whole visual side of the album, done by none other than Hugh Syme (if you’re not familiar with his work, make sure to check out the long list of covers that he created since 1975), is way more brilliant than the choice of name, since he not only came up with the incredible album cover idea (apple / zebra), he also created fantastic images for each of the songs in the booklet. The line-up of A-Z gets completed by bass player Philip Bynoe (STEVE VAI, RING OF FIRE, WARLORD), French keyboarder Vivien Lalu and Netherlands based solo artist / guitarist Joop Wolters, who all delivered an incredible performance on all of the eleven tracks that are featured on the band’s self-titled debut full length. So, what can you expect musically? If you think of Progressive Metal because of the musicians involved, you’re not completely wrong, but A-Z is way more than just that. The whole musicianship is just amazing, but at the end of the day it’s the well done combination of classic Arena Rock / AOR mixed with complex songstructures, which is lifting the record to an even higher level. Before I got to hear the album in its entirety, I already knew the album opener, the straight uptempo rocker ‘Trial By Fire’ (one of three singles released so far) and immediately couldn’t get its catchy chorus out of my head again. But it wasn’t just the great melodyline of the song, it was also the incredible drum work of Mark Zonder. While other drummers would probably just add a straight ahead, driving beat to such a song, Mr. Zonder comes up with lots of interesting little fills in between, which would even make the great late Neil Peart (R.I.P.) very proud. And when we’re already talking about RUSH, let me tell you that fans of the “Hold Your Fire” period of the legendary Canadians, will most certainly get a real kick out of this material as well. It’s catchy, got tons of amazing hooklines, great solo sections (no matter if it’s a smoking guitar- or keyboard-solo) and on top of it you have a drummer that simply can’t be of this world. Zonder must be one of the most underrated musicians of this genre ever, and Ray Alder’s vocals sound better than ever. He convinces with a surprising big variety of power, melody and softness on all of the tracks. To pick any standout seems almost impossible since the record is convincing from start to finish (or should I better say from A-Z?). But to get a better picture of the diversity, let me mention some of them nevertheless. ‘The Far Side Of The Horizon’ is not only the longest, but also the most epic track on the album. After a pretty heavy sounding opening, it switches into a bombastic direction with an oriental feel to it, then it offers a catchy, almost SEAL-like chorus and finally drifts into almost jazzy territories, that immediately let me think of the more complex SAGA material. On the total opposite we have two moody ballad type songs in the best JOURNEY / TOTO style. One of them is ‘Rise Again’, which is backed with great keyboard / piano passages, the other one is ‘Sometimes’, also a single, which increases its heaviness towards the end. ‘Run Away’ has an uptempo opening, recalls SAGA again in the guitar department and once again features some incredible drumming, while ‘Borrowed Time’ is pretty heavy and probably the most modern sounding track on here, featuring a heavy grooving guitar riff. And the production? It’s absolutely perfect! Before I checked the credits I immediately thought of Peter Collins (RUSH, QUEENSRYCHE), since you’ll hear every single instrument equally and crystal clear in the mix, but it was produced by Mark Zonder and mixed and mastered by Simone Mularoni at Domination Studio, so that came as another nice surprise for sure. Of course the music of A-Z won’t convince any narrowmined Death Metal die hard, but if you’re openminded enough to appreciate music of all kinds, this is an album you definitely shouldn’t miss out on! For more info please visit www.facebook.com/athruzband, www.facebook.com/metalbladerecords