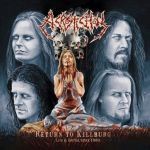 ACROSTICHON is another chapter in the book of forgotten jewels. Formed in 1989 and after releasing some demo tapes, (split) EPs and a live recording the band from the Netherlands finally put out their debut full-length in 1993. “Engraved In Black” is a masterpiece of brutal Death Metal with a heavy drift towards Doom Metal. But somehow the band never gained attention like their country mates GOREFEST, PESTILENCE, ASPHYX or SINISTER. A fact which is totally incomprehensible for me, but otherwise it is not the first time a band does not achieve the deserved success or recognition. A second album called “Sentenced” followed in 1995, but then they soon called the quits. After 15 years of silence ACROSTICHON played a gig in October 2009, which is now published by Vic Records. The live recording has been released before by Badger Records (limited to 300 vinyl items) with two bonus tracks plus the “Prologue” demo. The present release is without any bonus, just the twelve live tracks, but that is completely enough. Nothing but genuine Death Metal packed in a clear and punchy live sound. At some moments the vocalist Corinne van den Brand is not able to keep the deep guttural grunting and it tips over to hoarse shouting. But that is the only inconvenience. And it is totally negligible, since the rest is 100% Death Metal. www.facebook.com/acrostichondeathmetal, www.vicrecords.com