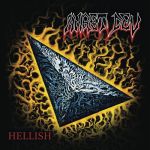 I was a big follower of the Polish scene back in the 90s. I ordered many great demos from there like “Morbid Reich” from VADER or “Invisible Circle” from ARMAGEDON just to name a few, and most of the time they were always killer. Death Metal coming from Poland in those days had something in common, and that was a big DEICIDE sound, with minor touches of DEATH, POSSESSED, SLAYER and MORBID ANGEL. This AHRET DEV double CD compilation starts with their only full length from 1997 that is a collection of riffs and aura that Death Metal lovers will surely worship, with a quite good production and execution. And this band follows the same steps and sound most of the bands from their country were doing. Do not expect anything original but the band knows how to create something good in the style, and they have that characteristic American Death Metal influences. This album was released a couple of years after many of their country mates had already released great albums, and due to the fact that at that time the Black Betal wave was taking over, this release was not that well known. The second CD contains demos and rehearsals, that come from a previous era to the recording of their album, and even the rehearsal track had a quite good sound, maybe with an even more evil approach as the vocals have a more cavernous sound. The style has remained the same, if maybe AHRET DEV were more in the early VADER style, meaning more SLAYER influence than the later DEICIDE sound they achieved in their album. Also included is a demo from WENETIS a band that was to become AHRET DEV and here it is a more thrashier sound, and with rawer production values, making this the complete recordings of the band. After they disbanded most of their members were nowhere to be found, only the vocalist is active but as a drummer and for some more Black Metal orientated bands. While there are some good songs here and there, and most of the material is quite competent and good, something was still missing, so they could be on a higher level to some of their country mates. Still, the full length itself and some demo songs are good enough to grab this CD compilation of a rather obscure band that deserves more recognition than what they had. www.facebook.com/ahretdevofficial, www.godzovwar.com