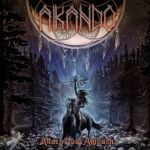 And it came to pass that in 2014 AKANDO was founded, a band whose members were deeply inspired by the culture of Native Americans. Since the band is located in Saarbrücken, Germany a pretty odd combination on the first look. But people all over the world are inspired by cultures from all over the world, be it real or fictional ones. And Heavy Metal has always been a genre with a strong penchant to imagery. Sadly the debut by ARKANDO starts with an intro that would rather fit to a Walt Disney children’s film. But that is the only shortfall of “Attack From Ambush”, the rest of the album is a highly enjoyable mixture of melodic Death Metal and Power Metal. Accordingly, especially during the faster songs like ‘Reservation’, the riffs are inspired by eighties Thrash Metal. Luckily no Folk instruments were used, except for a flute during the only slower song ‘The March Of A Thousand Miles’, so the Indian imagery is only present in the lyrics and artwork. Listening to this album again and again I have simply found nothing to criticize apart from the mentioned intro. Maybe the vocals are not everyone’s taste, since they are performed in a special way. A blend of shrieking and grunting, not high pitched nor deep guttural. If you are used to this kind of singing it does not affect the listening pleasure, but for fans of traditional Heavy Metal it may sound unfamiliar. Compared to all those bluff packages delivering Folk or Viking Metal, AKANDO forged a technically well-crafted great album which both fans of melodic Death Metal and traditional Heavy Metal fans can enjoy. So, just in case you are irritated by the imagery do not be fooled and visit www.facebook.com/akandoband or www.boersma-records.com