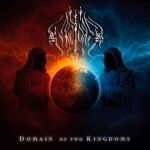 Formed way back in 2002 in Peru, this is the third album of evil, melodic Black Metal that only in South America can be forged in the very flames of hell! To start with the production, it is great, with a very strong guitar sound. Also the performance is very good. The music style is very close to what early DIMMU BORGIR, SAMAEL and ROTTING CHRIST were doing, with a lot of Thrash Metal influence in the guitar playing, and always keeping in mind the melody yet with a dark and sinister edge. The vocals are screamed mostly in Spanish although the titletrack of the album is in English. The vocals are also a big reference to early Shagrath and company. There is a good use of keyboards in here, but they are done with class and in the right spots to enhance the atmosphere of the song, something that also reminds a bit of other great Norwegians as GEHENNA. Something to be noticed is the very effective drumming, that actually enhances the songs, giving them that upper-tempo feeling. Also, noticeable and a lot is the influence of traditional Speed Metal in their compositions, used with also very good taste and melody yet keeping the darkness in their essence. Sometimes I can hear a similar sound and essence as with other South American maniacs like NEBIROS, basically in the way that they keep their Metal simple and direct, yet are able to come up with some really memorable melodies, which again at times are also quite similar to some riffs found in some 90s Dutch Death / Doom bands although used in their very own melodic Black Metal style. This is the kind of South American Metal that without being too brutal, or too extreme, it has a dark beauty and evil essence with finesse that few are able to conjure. This edition seems to have some song from their earlier material (last 3 tracks) and at almost 80 minutes is more than worth for your spell craft money. www.facebook.com/akeldam, www.facebook.com/thrashirts