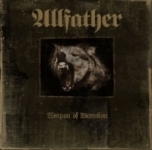 Although this raging Canadian trio was founded in 1996 and released a few demos and other stuff, I really have to admit that I have totally missed this band up to now. So I didn’t know what to expect from them when I put this little silver disc into my player. I thought it would be a kind of Viking Metal because of the band’s name. But I was completely wrong. No! ALLFATHER plays a total merciless blend of raging and violent Black / Death Metal! The pace is extremely fast and there’s been almost no breather within this roughly half an hour of pure mayhem. Just some mid paced parts to recover here. The riffing is excellent, seems quite technical at times but you don’t notice it that much. The drums hammer fast forward and crush everything what crosses their path. If you can imagine a mix of BESTIAL WARLUST, ANGEL CORPSE and ORDER FROM CHAOS then you might have an idea how this three Canadians sound like. I guess War Metal would fit here perfectly. The band even captures this chaotic, twisted riffing of the bands mentioned before. Despite this chaos the overall sound isn’t messy. It’s very powerful, well balanced and was produced by the band itself. The lyrical concept deals with Nietzsche as far as can I see. The only thing to complain is the length of the album. Not even 30 minutes is quite short for a full length album but with such raging stuff on the disc a longer playing time would not be so healthy for the neck. So just to make it short here: fans of the three bands named above should check ALLFATHER out. It’s for sure a good investment. All other maniacs who are into relentless aural assaults are also encouraged to have a listen here. Get in touch either with the label www.invictusproductions.net or visit the bands website http://allfather.cjb.net. A nice surprise here (at least for me)!