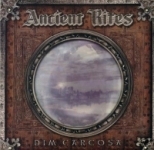 ANCIENT RITES is somehow Belgium’s only band I guess (next to AGATHOCLES maybe) who have a worldwide reputation and are part of the Metal scene for already a long time. Over the last 10 years, they progressed from a pure Black Metal act to a Metal band with more and more melodic and bombastic influences. As everybody knows, they started to experiment with keyboards carefully on “Fatherland” with a good result. This must have made them self-confident as on their new album, these orchestral and bombastic touches became bigger and bigger. Already in the opener ‘Exile (Litanies De Satan)’ you can easily hear, that the many concerts they played made them much tighter, but also that ANCIENT RITES still kept their own touches and influences. “Dim Carcosa” is actually not that ‘difficult’ to get into, but you will have to listen to it a few times before you will really appreciate it. There is always very much going on and many details to discover, like for example in ‘Exile (Litanies De Satan)’ or ‘Northsea’. My overall impression of the album is that most of the songs have become faster and that the orchestral and keyboard-parts have become much bigger, but got integrated in the music and the songs really well. Another positive mark is that the band still has a very own sound. I mean, I can’t come up with any band that sounds like them. Highlights are to my humble opinion ‘And The Horns (Called For War)’ (you’re really in the middle of a battle-field there) and ‘Götterdämmerung’ (a great track to bang your head to, this one will do excellent, played live!), but actually all the songs are on a high level. “Dim Carcosa” got recorded and produced in the Spacelab studio in Germany under supervision of the same team who were responsible for “Fatherland”, the production is much better this time though. You can hear this especially when you hear the drums which sound much more ‘real’ and not that cold and clinical as on “Fatherland”. Also the lyrical concept is once again quite intriguing and deals with many historical topics, the beloved subject of vocalist / bass-player Gunther. ‘Dim Carcosa’ is a very good follow-up to the highly acclaimed “Fatherland” album and will hopefully take the band to a higher level, they really deserve it after all the hard work!