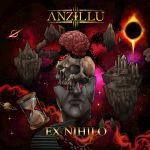 Hailing from Finland, ANZILLU (meaning “Abomination” in ancient Sumerian) have released their first full-length “Ex Nihilo” (meaning “out of nothing” – probably not ancient Sumerian). With four singles last year in 2022, the band has built up some anticipation for their Thrash Metal debut. And there’s a very prominent Tony Forester (MUNICIPAL WASTE, IRON REAGAN) vocal sound emitting from Teemu Kemppainen’s mouth. Yeah, I know, there’s not a whole lot of variation in the land of Thrash vocals. But Teemu reaches that slightly high-pitched style mentioned above. But so what? That’s fucking fine with me. ‘Needles (On My Nerves)’ starts it all off with some typical, but skillful guitars that bring in the rapid drums and issues in a mosh-fest of a track. ‘Mental Graveyard’ is confident in its bruskness. ANZILLU are a band that’s thrown away the usual Finnish Metal vibe and embraced the North American style which is basically an eruption of fun-filled, elbow-to-the-face Thrash. I can go on and on from track to track describing their sound, but I pretty much hopefully got my point across in the first few sentences. Guitarists Jesse Kamarainen and Sami Katajainen don’t necessarily deliver anything new. But what they do accomplish is a furious sound that gets the fists pumping, the heads banging and the boots stomping. Rasmus Kantonen’s consistent drumming also adds to the mix in a near perfect way. “Ex Nihilo”, in at 39 minutes, has that steady flow that’s just the right length to get your fill and wallow in its glory before it runs out of steam (which it doesn’t). It doesn’t overstay its welcome, and it doesn’t leave too early. And hey, just because their sound isn’t necessarily the most original, it is completely fucking incredible in its ability to summmon the Thrash Metal gods to raise bloody hell on the masses. Hails, ANZILLU. May you last for decades to come. For more info, check out www.facebook.com/anzillufi, www.facebook.com/salemrosemusic