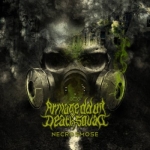 Anybody in my age knows this from the past, those times when there was no internet and all those sites: you read the name of a band and you immediately knew you had to check them out, cause it sounded cool. A name was, along with the cover artwork, a nice indicator for great Metal bands. Somehow these patterns still work decades later. The name ARMAGEDDON DEATH SQUAD is in my ears a good reason to check out the band using it. Yet, even back in the days, a name might hint on great music, but it hasn’t always proved a recipe for it. And sadly it is the same with ARMAGEDDON DEATH SQUAD and their first full length album “Necrosmose”. The name sounds great, but the music of the French four-piece is not really my cup of tea. Most of the time, their stuff reminds me of a pretty random mix of different Death Metal styles. There is the technical stuff, MORBID ANGEL style, there is the melodic aspect, early IN FLAMES style, and finally and most annoyingly we have the modern variant of the genre, that codswallop that was called Deathcore. In addition, I always had the feeling that I heard a certain riff or a harmony line before, just better. Before you get me wrong, it’s not that “Necrosmose” is complete rubbish. In some moments there are pretty nice ideas as well, especially towards the end with songs like ‘Guttural Romance’. But in the long run there are not too much moments that really catch my attention. ARMAGEDDON DEATH SQUAD is not a name that I will keep in best memory. In case you’d like to know more, visit www.facebook.com/armageddon-death-squad-190638127655159 or www.facebook.com/greatdanerecords