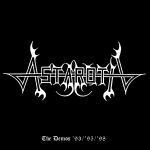 Finally, after 27 long years from their first demo release, ASTAROTH releases their first compilation of earlier releases without a studio album in between. It’s a shame it took this long. However, Metalheads finally get to experience the old school Death Metal that dates back to the early days of the genre. ASTAROTH, not to be confused with the other 23 bands with the same moniker, were a Tampa, Florida based band featuring guitars by NOCTURNUS AD’s Demian Heftel. Consisting of three early releases ("Songs Of Sorrow", "Lost State Of Dreams" and "Burning Christians"), "Demos ’93 / ’95 / ’98" is an extraordinary monument to the muffled, grimy, wicked sound of the early days with some Swedish influences thrown in. Newer fans of the genre should take notes. This isn’t your screamo bullshit. This is pure, unadultered Death Metal brutality. "Songs Of Sorrow" contains such gems as the demolishing ‘Eyes Of Black’, the thudding ‘Extinction’, the doomy, slithering ‘Drowning In Blood’ and the regurgitation of ‘The Body Before Me’. "Lost State Of Dreams’ begins with a faster-paced mosh-fest entitled ‘Suppressed Abandonment’ which will make your head explode. ‘Everlasting Decay’ is a chugging beast as ‘Lost State Of Dreams’ is a whirlwind of swirling guitars and chunky growls. And then there’s "Burning Christians" which includes the blazing title track with blood-curdling screams and fretboard-filled guitars. ‘Swallow Your Soul’ is the obvious EVIL DEAD tribute as ‘Bloodied Wings Of Destiny’ references PHANTASM. The final track ‘Heaven Has Sent Us A Sacrifice’ wraps up the compilation as more thrashy vocals solidify the direction the band seemed to be going before splitting up. It sucks ass that ASTAROTH didn’t continue and eventually release a proper studio album. But at least there’s "Demos ’93 / ’95 / ’98" which at least documents the band’s brief time in Death Metal history. For more information, check out www.vicrecords.com