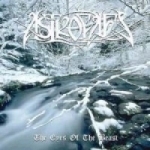 I am not familiar with the Ukrainian scene (Ukraine is yet the country of half of my ancestors), and this release is my first real contact with it. "The Eyes Of The Beast" is already the third album of ASTROFAES and it shows, as I am totally convinced by the quality and freshness of the band. Of course, the production is abysmal and let’s say that the musical abilities of the two warriors forming the nucleus of ASTROFAES still leave a lot to desire, but the overall result comes out surprisingly great. The strongest point of the album lies in Thurios’s vocal delivery. The man screams out his tormented lyrics with full power and force, from the very depths of his lungs. Musically-wise ASTROFAES stand between ancient BATHORY and IMMORTAL ("Battle In The North" / "Blizzard Beasts" era) but they bring forth their own touches of freshness to an otherwise rehashed recipe. I don’t know why, maybe it is the fact the musicians don’t fully master their instruments, but the release sounds very strange and attractive. The compositions are all fairly enjoyable, the core of them being kept at a mid-tempo pace (by the way, I think the drums are computerized). The very special guitar sound helps to create eerie atmospheres, sometimes reminiscent of the Norwegian classics, but the fact ASTROFAES are not Scandinavian becomes pretty obvious after a while. As usual considering the musical genre, the lyrics are mostly based on a glorification of nature, battles and a naive ethnic pride common within the ranks of the Black Metal aficionados. What I like the most with ASTROFAES is their ability to not fall down into the trap of predictability, thanks essentially of their use of uncommon chords, like for instance in ‘Damnation Of Silence’. ASTROFAES is a name to remember of if you look for something different and yet familiar. It is the lesser paradox of an excellent release I strongly recommend.