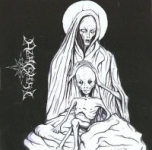 At the outset, I should admit that I have not been an ardent follower of the veteran Finnish Black Metal horde Azaghal. I own none of their records and have heard them only in passing. Furthermore, I have been told that their most recent album, “Omega”, is not necessarily the best entry point into their rather extensive catalog; but, as it was placed before me for this review, I will attempt to describe my response to it nonetheless. This album, the seventh full length released by Azaghal, opens with a twin guitar assault that is actually quite effective. At once the listener is totally immersed in Azaghal’s nihilistic and violent universe. However, over the course of the album, their tendency toward a more technical and modern Black Metal sound begins to grow old. Indeed, the major pitfall that Azaghal seem to be mired in on “Omega” is that of being too dynamic. Even at moments when Azaghal manage to summon riffs which invoke that majestic sound of pure hate and blasphemy, they veer off course too quickly. Rarely does it seem that a part lasts for more than four bars before they transition (sometimes very abruptly) into a new part. One never has the opportunity when listening to this album to fully permit the sounds to settle into their consciousness while attempting to take in the songs. At the album’s peaks, Azaghal manage to utilize just enough melody combined with a delivery that revolves around the layering of dual guitars each panned to predominantly different channels and with slight but vital tonal variations. The result is dense and violent, yet highly controlled. It seems to me though, however, that this sound would be better served by eliminating some of the more modern and technical elements such as the overbearing and cliché use of keyboards and guitar cutaways. Also frustrating is the overzealous use of vocals. Vocals cover almost every part of every song, it seems, and are delivered with the same rapid-fire rhythmic intensity as the guitars. This effect, while initially powerful, becomes tedious and exhausting by about three tracks into the album. As I listened, I found myself frequently desiring to be left alone with the instruments rather than being constantly assaulted by vocals. Overall, I cannot say that this album was ineffective, but nor can I say that I have been immediately possessed to explore the depths of the Azaghal catalog. However, I was discussing this album with a friend who is an Azaghal completist and who recently purchased this CD with enthusiasm and he seemed wholly satisfied by “Omega.” So perhaps for those with similar tastes as my friend, this album is essential. www.moribundcult.com