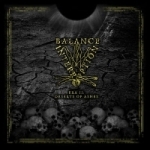 BALANCE INTERRUPTION
Era II: Deserts Of Ashes
(Hammer Of Hate Records)
37:04min
The second album from Ukranian Black Metallers BALANCE INTERRUPTION, “Era II: Deserts Of Ashes”, is a complex stained-glass work of fury, borrowing from a variety of heavy sources. The first thing to attract my attention were the VOIVOD influences, apparent in tracks such as ‘II. Mutation’, some of its parts sounding so much like robots colliding in space. There’s a liberal amount of keyboard work on this album, but fear not, it’s no techno-mashup à la MORBID ANGEL. Rather, BALANCE INTERRUPTION uses the keyboard the way it should be used in Metal: as a companion instrument; something to accentuate a riff, not constitute a riff unto itself. For this I feel compelled to give BALANCE INTERRUPTION a thumbs-up just for having the decency not to over-use their electronics. However, there’s definitely more to this band than self-restraint. In every other respect, they are committed to delivering nothing less than darkness and ferocity. Track six, for instance, ‘Streams Of Black Energy’, is not blindingly fast, but the pace is thrashy, steady, and brutal. To put it short, BALANCE INTERRUPTION maintain a constant equilibrium between the slow and fast, all the while interspersing their Metal with effects and harmonics that contribute to the atmosphere of the record, not sit on top of it like glittery pixies. A great, interesting record! www.myspace.com/balanceinterruption, www.hammer-of-hate.com
Nathan Shapiro