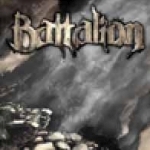 I gotta confess that I wasn’t familiar with this Belgian four-piece before I received their promo pack most recently… And even if I might have heard the name already, it wouldn’t necessarily mean that I exactly knew this particular outfit as there are / were at least eight (!!) other BATTALION’s around already… So, this, plus the fact that for some reason I associated the name with cheesy, modern Power Metal right away, not really indicates the best choice of a moniker to me anyway. Well, luckily my assumption in this case was wrong and this album (the band’s second) turned out to be a highly impressive one that I played quite often the last couple of days. BATTALION plays Death Metal the old school way, are unoriginal as fuck, but at least they do it with a lot of class! Somehow you could say that they have adopted the best elements of early 90s Florida Death Metal, but perform that in a rather Scandinavian manner. Throughout the entire playing time of the album you’re about to discover amazing musical skills that result in effective riffing and diverse, very precise drumming. But instead of ending up too technical sounding, the band prefers to use their talent in a very straight ahead way of writing. The opening track ‘Mechanized Blitzkrieg’ for example is based on a rather ‘Immortal Rites’ (MORBID ANGEL) type main riff, while the song itself has this typical, overall Swedish old school Death Metal feeling to me.The brutal vocal delivery of frontman Ruben Luts is just perfect for this style of music as it neither ends up in the extremely low grunted, nor the typical aggressive vein. Despite the brutality it is clearly understandable most of the time and in that respect more close to what a David Vincent does as opposed to a Mille Petrozza or Craig Pillard. Lyrically / image wise BATTALION mainly seem to focus on war related topics, which is also reflected in the coverart and album title. Not exactly my cup of coffee, but on the other hand, I couldn’t care less about Gore lyrics as well, so what the heck. Way more important anyway, is the fact that the album’s production is killer and compliments the material in the best possible way, so that old school Death Metal fans can easily add this disc to their shopping list. Sound samples and more info at www.myspace.com/battalionsquadcamp. Label contact: www.shiver-records.com