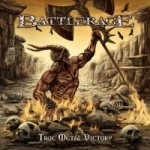 I don’t know… An album title like “True Metal Victory” may work like a real turn-off for some people, but then again it would be very foolish if one let some album title alone keeping your fingers away from some records. The Chilean BATTLERAGE may be fighting for their ‘True Metal’ with the taste of blood in between their lips – and there’s definitely nothing wrong with that. Gladly – this cheesy ideology about ‘brothers-of-swords-let’s-fight-together-and-kill-the-posers’, trademarked by bands like MANOWAR coming to my mind on the top of the pile, hasn’t affected these Chilean Metal warriors’ straightforward and aggressive Heavy Metal march (with a slight twist to Doom Metal) on the band’s 3rd full-length studio opus, titled “True Metal Victory”. Indeed, their lyrics may be just downright cheesy and over-the-top, but that’s pretty much a secondary thing because the music itself nicely overrides whole this cheesiness factor in them, BATTLERAGE overall proving to be quite a potential bunch when it comes to making riff-driven, crunchy and relentless Heavy Metal – with some balls, may I add. Vocalist Fox-Lin Torres’ gruff vocal lines – added with some clean backing vocal parts add a powerful element into the songs, while guitarist Daniel Román’s skull-splitting yet very tasteful guitar rolls and blazing lead work of Gabriel Hidalgo seem to take command most of the time, leading their troops onward to victories that BATTLERAGE is supposedly looking for: introducing new people to their music on the album-by-album basis, which “True Metal Victory” will obviously be doing for them also. Without underlining some specific ‘favorite’ cuts out of this opus, I would suggest to check out the whole album because BATTLERAGE’s dark-tinged, shredding Heavy Metal is thoroughly well-executed – surely cutting more flesh than many other similar acts of the same ink. You can even take my (s)word for that. www.myspace.com/battleragetruemetal, www.metal-on-metal.com