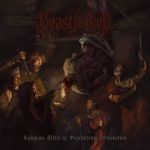 Ever since the very first Black Metal albums I bought, I’ve always loved the American scene more than the Scandinavian one. The same goes for the Greek and the South American ones, if compared to the bands coming from the extreme north of Europe. These three scenes, in my opinion, had in the early days (and still have) a genuine evil touch that in Norway and Sweden has been lost over the years. Ok, the Scandinavian countries are still the place to go, if you’re looking for a cold sound and some freezing atmospheres, but if you wanna feel the purest evilness of Black Metal, America is an entirely different story. “Sanguine Elixir Of Psychotropic Divination” is the first EP from the American band BEASTLURKER, recently released by Godz Ov War Productions. Almost 21 minutes of American Black / Death / Thrash Metal. Here we have a total of four songs that sound like a mixture of American Black Metal (THORNSPAWN), American Black / Thrash Metal (ABSU and SATHANAS) and American Black / Death Metal (ACHERON and ANGELCORPSE). BEASTLURKER sound like a good hybrid between the over mentioned styles; they don’t excel in any of them, but the result is very solid. The martial intro creates a pretty obscure atmosphere. The guitar riffs range from minimalist tremolo picking Black Metal in the vein of PROFANATICA, raw Death Metal and some Thrash Metal parts; then we have also a couple of doomish slowdowns. The drums are mostly double bass mid tempos with some euroblast style accelerations and few blast beats here and there. The vocals are the classic Black Metal screamings, pretty raspy and not particularly inspired. The overall sound production is heavy, sharp and freezing. An extra point goes to the front cover artwork, that boasts a dark and gory “decapitation scene” with a strong byblical touch pretty reminescent of Caravaggio. In conclusion, “Sanguine Elixir Of Psychotropic Divination” is a good EP from a young and interesting band. Will BEASTLURKER be able to honour the promises in the future? Only time and a full length album will tell. More info at: www.facebook.com/beastlurker-254410612148116, www.godzovwar.com