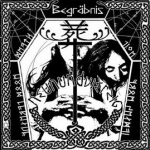 Despite the misleading German band name (which means "Funeral" in English) this trio hails from Sendai / Japan and plays Funeral Doom Metal exclusively. The band seems to have a soft spot for the German language as all of their releases and compositions have German titles. Arrgghhh, I am shivering ’cause their 2nd demo "Neunundvierzig" ("forty-nine" in English) includes seven tunes (three long ones and four short instrumentals which serve as kind of interludes) of very slow, really sinister and depressive stuff. This demo totally reeks of embalmed dead bodies and you can feel the creeping dead. A very ghastly atmosphere wraps each track of this Nippon Doomsters – the perfect soundtrack for your funeral! This stuff is monotonous, ultra slooowww and rips your soul. The performance of female vocalist Fumiko is just amazing as her style of singing adds some extra darkness and uncanniness to the band’s material. It sounds like she is cursed – a gloomy, elegiac screeching. This demo will appeal to just a minority out there but worshippers of THERGOTHON, SKEPTICISM, EVOKEN or similar acts should dare to have a listen. For die hard Doomsters only! www.facebook.com/begrabnis