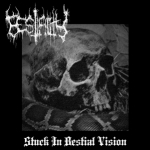 The name BESTIALITY is such an obvious choice for an extreme Metal band – no one really took that name for a very long time. Now we have two new bands with this name. There is the German Death Metal band who released their album last year. And there is this Polish wrecking crew. This BESTIALITY is from Warsaw and “Stuck In Bestial Vision” is their first full length after a three-track EP. And this rather short album is a real full scale attack. Thrashing Black Metal delivered with rabies and a fucking rude attitude – that’s what the four Poles have to offer. Of course there are a lot of bands who play music like this. But simple Black Thrash Metal always is something refreshing, especially when it’s played with such reckless abandon. Songs like the gruff ‘Mortalist’, the slightly punky ‘Raped By The Devil’ or the well adapted BATHORY cover tune ‘Hades’ are a mere joy, not just for lovers of the game, but for everyone into rude and fresh thrashing maniacal music. So, no further words here, except for the info that both original songs from their EP are featured here as a bonus – only the DESTRÖYER 666 cover was left out. Check BESTIALITY out at www.facebook.com/pages/bestiality/838611276153519 or the label at www.oldtemple.com