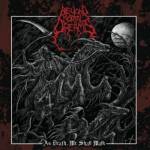 BEYOND MORTAL DREAMS
As Death, We Shall Walk
(Lavadome Productions)
47:03min

BEYOND MORTAL DREAMS from Australia just released a compilation entitled “As Death, We Shall Walk” via Lavadome Productions. I have never heard of this band before which made me eager to listen to what kind of unearthly perversions they are able to conjure. ‘Lamia’, the opener starts with swirling mid 90s Death Metal riffs combined with non-stop blast beats. This formula continues until track 7 which is a very dull version of a masterpiece called ‘Flag Of Hate’ followed by a nice version of NOCTURNUS’ ‘Lake Of Fire’ (feat. Mike Browning on guest vocals – Frank). The closer ‘Underground Dwellers’ features a bit more diversity even though so-called “diversity” is mostly added by a large amount of guitar sweeps – and as we all know, sweeping is for janitors only. So all in all this is not a release that suits my kinda taste, which doesn’t mean it’s bad of corpse. If you are a connoisseur of very down-tuned guitars which lay embedded on a field of blast beats with very low and guttural vocals on top BEYOND MORTAL DREAMS definitely is the right band for you. If you are into denim, leather, spikes and chains with "Live Undead" on repeat on your stereo you probably won’t check out the following links: www.facebook.com/beyondmortaldreams, www.lavadome.org