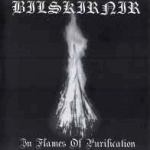 One of the more controversial German bands has finally, after a couple of demos and EPs, released their debut. And I shall not get further into details why several mailorders like No Colours or Last Episode are not permitted to distribute this. However, musicwise I feel always reminded of the slow GORGOROTH on “Under The Sign…” and most obvious in the track ‘Die Lichtung’ of BURZUM whom BILSKIRNIR covered on an earlier effort. The music itself offers no reason to mourn but, although I normally do not care too much about production etc., the sound could have been far more heavy. Especially the aforementioned epic ‘Die Lichtung’ (more than 13 minutes in length) could have used a far more massive sound, something that is comparable to ABYSSIC HATE’s soundwall for example. The CD includes – beside four own compositions and a rather unspectacular GRAVELAND cover (‘Barbarism Returns’) – four bonus songs from their earlier releases. Surprisingly, the last one ‘For The Return Of Paganism…’ (taken from the 7″ of the same title) is beside ‘Die Lichtung’ the best song on this CD and has the best sound! The more you actually listen to this album the less you realise the thin production until you reach the ninth song again. Conclusion: If you don’t care too much about production, this is really worth its money, especially as the CD states that it shall not be sold for more than 10,-€/10,- US$ incl. p&p. Not a must-have but a quite good opportunity.