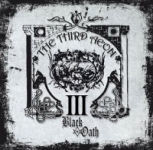 I haven’t laid ears on music from BLACK OATH until I pushed play on this album, and to be honest not checked up on what I was about to listen to and review, and to be even more honest, I might have had another band in mind when I said yes to review this one. Though right before I began listening to this album, I had gone through a BLACK SABBATH semi-marathon, so I was a bit surprised when the heavy riffing and doomy atmosphere continued, and had to double check that all connectors were on their right place. They were and like that, more hours of Doom were ahead! This Italian band is delivering traditional Doom Metal as it was intended to be. Gloomy, dark and melancholic, a really atmospheric and gripping trip into the grey darkness that once in a while surround us all. During the first song I was thinking a lot of the Swedish horde AVERON that released a stellar demo and a couple of decent albums in their short lived career, and AVERON was highly influenced by fellow Swedes CANDLEMASS and the songwriter in BLACK OATH is indeed very influenced by Edling, Johansson and Björkman’s way of writing and delivering music, some riffs might even be described as pure homage. Though that isn’t all bad, CANDLEMASS does kick ass. Musically I dig this record, it is catching and the power chords rip through the air and make my head ‘bang and my feet stomp. Though the compositions aren’t always that strong and fade a bit in quality and stamina here and there. The vocal becomes a bit too much for me in the length as well, though it fits the music and atmopshere most of the time, so that’s a matter of acquired taste. The use of keys spark the level of energy most of the time, so that’s a big plus. The production is quite good as well, large and open, fitting the music really good. It leaves a lot of space for the instruments to fade out, the high vocals linger in limbo and each instrument can be heard almost all the way through, which is good as guitar, bass, keys and cymbals play a big part in certain moments, moments that can, as here lift the music, or if badly mixed ruin the atmosphere. BLACK OATH is a fairly new band and this is their debut full length, and with that in mind, I don’t have a doubt that we can await some hell of releases in the future. “The Third Aeon” offers a wide spectre of traditional ass kicking Doom that’ll grap the attention of many doomheads, as the base of the music is gripping and posses a great and moving atmosphere. The band still has a little way to go before they become really good, though they don’t need to take many steps to get there. www.myspace.com/blackoath666, www.horrorrecords.com, www.ihate.se