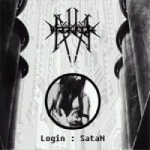 The pulse of a heart gradually beating faster introduces us to the world of BLACKLODGE, into their sterile realm of Industrial Black Metal. Luckily BLACKLODGE, cosisting of Saint Vincent (vox + guit + beats), Silence (guit), Diam’s (bass) and the ominous Aluminium Reflektor (Satanic Pulse Cyberdrums + Hell Catalyst) avoid the mistake of many drum computer-fueled Metal acts (and almost all "Cyber Gore Grind" surgeons) that plow through their compositions with machine gun speed gabba beats devoid of any sense for drum patterns or breaks. The foundation for this three-piece has been laid down in 1994 with FAUST playing Black Metal until its demise in 1998 which then led to the creation of BLACKLODGE. Musically we are offered cold sounding Black Metal bearing some northern influences while maintaining an own identity. Here and there some thrashy elements and melodic parts shine through the riffing. The grim vocalisations are distorted which really fits perfectly into the overall sound even though I am normally not too keen on the use of effects on the voice. Electronic elements like some synthesizer lines or pulsing sequencers are integrated in a sensible way, sounding much more honest, well placed and able than the laughable attempts at a modern "dance" Metal style undertaken by KOVENANT or DEATHSTARS who do their best to rip off RAMMSTEIN in the most inferior way.The synthetic drum patterns, obviously a crucial element, are programmed with a sense for structuring and well thought breaks. Raging speed outbursts like in the dismal ‘Subject To Tragedy’ have their part in the world of BLACKLODGE as well as traces of melody found in ‘Satanus Sections’ or the melancholic instrumental ‘Suicide Tutorials’. I can’t help but the pulsing ‘The Arrival Of Satan’ has a certain BATHORY influence for me. Apparently, imagery and concept (drugs) are influenced by the until today unparalleled MYSTICUM who proved to be the forerunners of this particular genre, I would say. Photos are taken in an industrial surrounding and mastermind Saint Vincent poses with a bracelet not with spikes, no, but with syringes attached to it (also included in the band’s logo where they form a pentagram). The production provided by a member of ANAAL NATHRAKH clads the material in a cold and harsh, slightly buzzing synthetic sound. Be assured that twisted insanity exists not only in dark woods or ancient crypts but as well under a neon sky overshadowing barren concrete landscapes. So if you enjoy the efforts undertaken in that direction by acts like RED HARVEST, DIABOLICUM, ABORYM, HERZKRANK, DHG or maybe THORNS you have to check out these guys and their transmission unit, the Aluminium Reflektor out as BLACKLODGE add their own trademarks to this particular style. On the homepage you will find detailed information about their previous releases and all the rest… BLACKLODGE email contact: saintvincent@loginsatan.org , homepage: www.loginsatan.org. Label contact: Blazing Productions, c/o F. Cuccureddu, G. v. Oostenstraat 24, 2612 Delft, The Netherlands, email: blazingproductions@yahoo.com