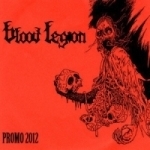 First off, to be honest, I’m no expert in the Malaysian Metal scene by any means. This 5-piece Death Metal act called BLOOD LEGION, comes from Kuala Lumpur, Malaysia – and the band’s 2nd 3-track promotional demo – simply titled as "Promo 2012" made its way on my hands. The band mentions a kinda diverse list of inspirational bands – both from Metal and Rock, that have either musically or philosophically guided each member’s musical orientation in BLOOD LEGION. Mentioned are such names from CANNIBAL CORPSE to MORBID ANGEL to MERCYFUL FATE / KING DIAMOND to PINK FLOYD to BLUE ÖYSTER CULT – and the list goes on and on. However, BLOOD LEGION’s backbone has been built up on a heavy, simple and underground-ish sounding Death Metal, making the kind of impression on listeners that they are still at their early stages to create a solid sound for themselves. On this 3-track demo, they also sound like one; a young band that’s trying to make things happening for them but without gaining too much attention to their side as of yet. I mean, you can tell almost right away that BLOOD LEGION is a newcomer to the worldwide battlefield of Metal music; they actually do have quite a few things to be improved within their sound, just to get recognized even more. Both ‘God Of Lies’ and ‘Against The Sun’ sadly hardly impress anyone with a more selective taste for a real quality in Death Metal but gladly the last track off of this 3-song effort, ‘Blood Legion’, is the one that already has something in it that should put the stars for the correct position for this Malaysian Death Metal horde. It’s a relatively fast-paced number that in some strange way, brings DEMIGOD’s alter ego era, NEVERBORN, to mind – especially the song’s first 2 minutes out of it. ‘Blood Legion’ as a single song, makes a somewhat great promise regarding the band’s future stuff, if they are just about to choose a similar style what this aforementioned song in question, represents in its fine, uncompromising style. Contact: www.facebook.com/bloodlegion666 or www.reverbnation.com/bloodlegion666