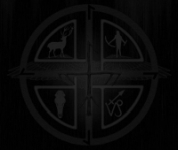 BLOOD OF THE BLACK OWL, formerly known as SVART UGLE, shows me another form of darkness than I ever experienced. This is the second controversial release that crossed my path, after the impressive NECHOCHWEN release, both are signed by Bindune Records. So what justifies such a record a place in the VFTD review-section? Well, first of all, the dark and compelling atmosphere! Second, quality, found in the very professional production. “A Banishing Ritual” consists of 4 tracks, clocking 10 minutes, which all are part of a ‘movement’. The music in the first track ‘Intent (Movement I)’ can be described as a soundtrack for an incantation. The ambient music sets a dreamy and wide landscape to concentrate on the dramatic vocals which cast some sort of spell. Second ‘The Statement Of Will (Movement II)’ start with a distortion like a speedy WINTER. Soon this is interupted by an ambient nightfall over a wide landscape somewhere in time when Indians dwelled somewhere in the canyon lands anyway, that’s what I imagined with these sounds. Soon the Doom Metal sets in again to flow into the third movement ‘Chant Of The Captured Spirit (Movement III)’ is a hypnotising ambient trip of darkness and horror and opens the door to another galaxy. Too long and monotone for my (sober) taste. Fourth and final ‘The Final Banishing (Movement VI)’ is a repetition of the first track to enclose this meditation. I suggest every Metal fan with an interest in dark atmospheric and rituallic music to check this out. If SUN O))) appeals to you, try this one. Especially in the Black Metal and Funeral Doom such experiments aren’t new. It was an interesting trip apart from the third track. www.myspace.com/bloodoftheblackowl, www.bindrunerecordings.com