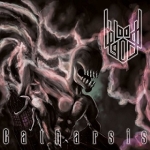 This is my first approach to BLOODGOD, a Death Metal band coming from the Netherlands and “Catharsis” is their second EP released independently this year. The first song, ‘Valar Morghulis’ is a nice well-worked mid-tempo song with good tempo changes. The second song and the one that gives the name to this EP is a somewhat melodic one. Sometimes sounds like early ARCH ENEMY or IN FLAMES. Some vocals remind me of Jeff Walker (CARCASS) in the “Swansong” album. ‘Hammerite’, the third song here, has a really good acoustic introduction similar to OPETH in their “Blackwater Park” album. The development of the song stays on the melodic side already listened in the previous track. ”T Schrickelik Tempeest’, the fourth song, is in the same way as the previous ones and shows some contemporary ENSLAVED influences, especially on guitars. This EP closes with ‘Satan’s Smile’, the shortest song here. The only thing I have as a reference to call this EP a Death Metal production is the vocal department and some blast beats here and there. In my opinion, BLOODGOD has a lot of good ideas but really I don’t know what happened here. The result is an uninspired average Death Metal EP with some melodic intonations, good vocals and lack of intensity. For more information visit: www.facebook.com/bloodgod.metal, http://bloodgod.bandcamp.com