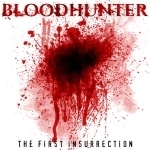 BLOODHUNTER is a Death Metal band from Spain. Formed in 2008 by Fenris and later joined by Diva Satanica. As a duo, with Fenris taking care of all instruments and Diva Satanica on vocals, they released their 3 song demo "The First Insurrection" in 2013. One can’t deny that there is a deal of modern sound in BLOODHUNTER’s music. Anyone searching for raw or Lo-Fi Death Metal better look elsewhere. This is a modern version of Death Metal, with both, Thrash and Black Metal influences, that add a lot of variation to their style. Production wise, every instrument is audible and clear, with a nice edge to the guitar tone and some heavy riffing, which is detailed and sharp. The drums are a little sterile (I do think it is a drum machine), but they do mix well with the overall sound. The bass guitar is there, but doesn’t come through as high as the other instruments. Personally, I would’ve used some "muddier" overtones, just to make things rawer and not that polished. The comparisons to other female fronted Death Metal bands are unavoidable, but in this department is where BLOODHUNTER has started to get away from all the others. Diva Satanica has an identity. Her vocal approach, reminiscent of the late Dawn Crosby, is a distinct grunt and not the usual deep growl. Throughout both songs (since the first one is an instrumental intro), BLOODHUNTER shows that they have enough potential to become a recognized name in the international scene. Let’s wait and see how the develop. A band to look out for in the future! You can find all further information here: www.facebook.com/bloodhunterofficial, http://bloodhunter.bandcamp.com