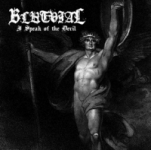 And sometimes they return – and if somebody is recreating the glorious times of Norwegian Black Metal in such a remarkable way a band like BLUTVIAL is deserving my deepest respect. The album can be easily summarised as a tribute to the last decade of Norwegian Black Metal – this starts with a typical (in this case a positive world) black & white cover , the sound is not too clean and when it comes to the presented music the former Trondheim legions like KEEP OF KALESSIN & BLOODTHORN and without doubt also MAYHEM (everything they released before 1997) are shining brightly at the horizon. I’m not completely sure if BLUTVIAL can be called a band due to involvement of their members is several other entities for example but one thing is certain – that in the last 10 years not a single British band has released a more convincing release. If it comes to the ten commandments of Black Metal – things like Black Metal must sound ugly, raw, misanthropic etc.- you can find at least 9 on "I Speak Of The Devil". This is no mass-compatible product this is Black Metal – so what should I say more – Amen! www.myspace.com/blutvial, www.spinefarm.fi