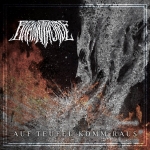 Black Forest, Germany. A mystery place, emotionally charged with ancient legends, gloom and obscurity, animating the imaginations from the other side. My personal approach is a rather droll or humorous one, because I always think of traditional costumes and garbs like the "Bollenhut", just google this untranslatable word to know what I am talking about. Anyway, the duo BRANNTHORDE is hailing from the Black Forest and I guess some bands are envious of that location. The perfect place of origin for a Black Metal outfit. As far as I overview BRANNTHORDE was initially a solo-project by Roman Hilser (FUCK YOU AND DIE) and in 2014 Giuliano Barbieri (DER WEG EINER FREIHEIT, FUCK YOU AND DIE) joined. The debut was already recorded and mixed in November 2014 and now finally is released in May 2015, the reason for this delay is unknown to me, maybe it is just the way things run releasing an album more or less on your own. The label in charge, Astat Entertainment, is in their own words "combining forces of a rather smaller group of musicians and artists to release music from basic formats to fully elaborated projects", the typical do-it-yourself concept. But let’s take a closer look to the music. Black Metal with shrieking vocals, varied drumming with lots of blast beats and a typical Swedish Black Metal guitar sound. The use of the German language and samples (within the song, not just as intro or outro) and the song-structures made me more than once think of "Srontgorrth" by NAGELFAR. Sometimes the different parts during a song sound a little bit inhomogeneous and patched up, but it does not really affect the overall impression of "Auf Teufel Komm Raus". If you agree with me and some other people the latest MARDUK album "Frontschwein" being "very vanilla" here is an alternative. Compared to dull-egged, raw and simple Black Metal BRANNTHORDE can be described as progressive, but at every moment keeping the Black Metal spirit alive. www.facebook.com/brannthorde, https://brannthorde.bandcamp.com, www.astatentertainment.com