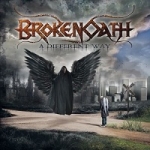 The name NIRVANA may ring a bell to most Voices readers, but in this case it is not the legendary NIRVANA 2002 from Sweden but the band which started the Grunge Rock trend some 20 years ago by releasing "Nevermind". Another influence are, especially regarding the vocals, NICKELBACK. The vocalist sounds pretty much like Chad Kroeger, as far I can judge. Because the times I listen to a band like NICKELBACK and other similar Rock bands are like – zero. Okay, sometimes at work or while doing housework I listen to mainstream radio, but that is all. Sometimes "A Different Way" surprises with sing a long chorus and tends more into Punk Rock. All I can say is that the listener will get some nice Hard Rock. Sometimes a Metal riffs make an appearance, but luckily the whole affair is not some kind of Nu Metal. Solid hand-made Hard Rock, I guess no one is getting earache from listening to "A Different Way". www.facebook.com/brokenoath.se, www.sliptrickrecords.com