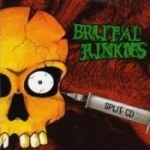 Skull Fucked Productions from France is a very dedicated underground label, specialized in releasing uncompromising underground stuff. BRUTAL JUNKIES features altogether 22 songs by one German and two French bands. Tracks 1 to 5 are by CYNICAL BASTARD (GER) who play brutal Death Metal with many groovy parts. All five songs come from their second release “Face2Face“. They surely prefer mid- and uptempo paced songs from blastbeats, but neatly vary the speed of their songs. The vocalist is eager to vary his contribution, too, which results in five strong and moshing Death Metal songs (www.cynicalbastard.de). Next up are nine songs by UNFORMED (FRA) with harsh Death / Grind with typical frognoise / screaming vocals, which get a bit monotonous after a while. The songs go full speed, but numerous technical and slowed down parts save them from getting boring (www.unformed-eatmealive.com). The last contributing band is GASTRICK BURST (FRA). Judging from the song titles (e.g. ‘Yogurt Attack’ or ‘Patrick Burst’) and pictures with quite strange stage outfit (nice kilt, by the way) on their website, the six guys of GASTRICK BURST seem to be more on the fun side of Grind, maybe psycho Hippie or bathing trunks Grind, haha. But musically they are above suspicion, playing fast and well-structured Death / Grind with a few funny lapses. The eight songs are intensely intoned by two vocalists, while the rest of the band is delivering fast grinding entertainment (www.deadcirkus.com/gastrickburst/index.php). In a nutshell, all three featured bands and the label are worth being supported, so check the websites and this well-compiled split CD. http://skullfuckedprod.free.fr/