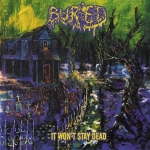 It was about time that these sick Chilean puppies made some noise again! The band has been around since 2013, though hasn’t released that much, which is a damn shame, as the material they have released is quite good! Though all the members are busy in other bands as well. On top of that I can see that BURIED’s drummer has left the band since the recording of the two tracks on this 7” EP, and the original bassist was replaced a couple of years ago. BURIED has so far released two demos that are compiled on the quite enjoyable “Deathless Corpses And Voodoo Rites”, a slaying live album recorded at the Devastación Metálica XIII Fest in 2017 – a fest where they presented the two tracks on this EP. When these two tracks were recorded and who was in the line-up when they recorded, I do not know, though one thing is for sure and that is that guitarist and vocalist Undead Milita is present. His way of riffing, guitar tone and sick vocals, inspired quite largely by the one and only Chris Reifert from AUTOPSY and ABSCESS, are a big part of BURIED’s sound and I reckon he also is behind the songwriting. Musically there is also inspiration found in AUTOPSY, and their peers in the early years in IMPETIGO and REPULSION, so the music reeks of filthy hooking blood dripping riffs, channeled impending doom, voracious mid-tempo beatings and a dusty nostalgic feel. This two track EP with the 7:40 minute long title track and the 5:39 minute B-side is worth a listen or 50, especially if the mentioned bands in this review are what you like or if gory Death Metal in its purest form is what turns you on! https://voodooritesofburied.bandcamp.com, www.facebook.com/exnihilodistro