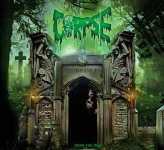 I have nothing against Christian Heavy Metal and its subgenres, because when it comes to life, work, music etc, everyone has his own beliefs and they should be respected. I think that when we listen to an album, a significant part of what really matters is the value of music, regardless of the lyrical themes or the concept. As long as Christian Metal isn’t a form of proselytism and evangelization, it’s not a problem for me. I must admit that I’m into a bunch of Christian bands: MORTIFICATION and TROUBLE, among others. You would be surprised how many cult names in Heavy Metal are Christians, so we just have to accept their ideas, although there’s no doubt that morbid and satanic themes are better. That said, I have listened to the newest release by the American band CORPSE as the latest CD collection of a Death Metal band from Kentucky and not as a Christian Death Metal band’s album. If you approach "From The Dead" in this way, I’m pretty sure that you’ll enjoy it, because it’s a killer little piece of American old school and brutal Death Metal. CORPSE are a very old band, active since 1993, and are now back with this new ‘best of’ CD, that includes their first and only full length album "From The Grave" (recorded and released in 1997) and the "Among The Dead" EP from 2013. Almost 60 minutes of sick and raw American Death Metal with a simplistic but effective songwriting. CORPSE’s style is minimalist and savage, they sound like a mixture of early CANNIBAL CORPSE, "Eaten Back To Life" era, "Luck Of The Corpse" by DECEASED, TORTURE KRYPT, PARALYSIS, EMBALMER, INFAMY and MORTICIAN’s early works with Matt Sicher on drums. The production is raw, but with the typical American Death Metal sound: fat and powerful, with a very deep and guttural voice, downtuned guitars and a punchy bass tone. The drumming is killer and brutal with chaotic blast beats, furious d-beats, along with some mid tempos and slow parts enriched by a very consistent double bass. The 13 songs from "From The Grave" are a very good example of old school American brutal Death Metal from the 90s. The tracks taken from the "Among The Dead" EP follow the same lines, but in some parts have a little less static vocal approach with some macabre screamings in the vein of the late Frank ‘Killjoy’ Pucci from NECROPHAGIA (R.I.P.). If I had to find something bad in this album, I would say the front cover artwork: an uninspired and cheesy digital paint. This collection has been released by the Russian label GS Productions in only 100 copies. Well, CORPSE will never get the recognition they deserve because of their religious beliefs, but if you just consider the music on its own without prejudice, you’ll discover a very sick and brutal band. More band info at www.facebook.com/corpsethegrave, label contact: www.gsp-music.com