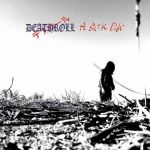 Since the band’s homepage is written in Japanese and the label’s homepage simply provided no information I asked the internet. Once more the slogan never trust the internet confirmed its validity. At some place information is given that BURZUM, MORBID ANGEL, SLAYER and JUDAS PRIEST influenced DEATHROLL. In fact this information could not be more wrong. Although I am curious how a mix of mentioned bands would sound like. On album number five by the one-man band the music is instead performed in a mid-tempo way, early VENOM had a lasting effect. But sadly without the wild, uncompromising energy and attitude of the forefathers of extreme Metal. Instead DEATHROLL are trapped in an uninspiring groove orientated style of playing. Accordingly the monotonous performed vocals are not giving the album a special vibe. In my eyes it simply lacks of an idea or inspiration. The best moments during the quarter of an hour playing time are when the pace is speeded up and the guitars are tipping over to some kind of tremolo picking style. But those elements are only sparsely hearable and therefore my overall expression is not changed. "A Sick Life" is faceless, unadventurous and most ordinary music. If anyone is interested anyhow, more information can be found here www.facebook.com/desurolu and here www.stf-records.de