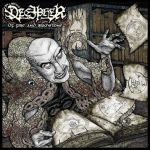 Greece’s input into the Black Metal scene ranges anywhere from the battle-infested powerful sound of ROTTING CHRIST to the chaotic, blistering wails of RAVENCULT. Athens has shat forth DECIPHER, a rawer, somewhat simple amalgamation of early blastbeat-riddled Black Metal and a slight hint of old school Power Metal riffs on a couple of tracks. It sounds like a bizarre combination but it fits together quite nicely. Looking more like a modern Metalcore band than a Black Metal troupe, consisting of members Mick Leventellis (vocals), Eisenheart (bass), Kostas Gerochristos (guitars), Kostas Xatzis (guitars) and Nodas Chatzopoulos (drums), DECIPHER have delivered their first release "Of Fire And Brimstone", a four track EP. ‘Prolusio’ is an acoustic guitar intro leading into the furious ‘Unobstructed Sequence Of Disorder’ that starts out as pure Black Metal before breaking into a kick-ass stomper with a more traditional guitar sound. The track wavers between multiple genres while still maintaining its blackness. ‘Fire And Brimstone’ has a traditional Black Metal vibe that doesn’t necessarily offer anything new, but also doesn’t need to. It stands tall on its own. The final track ‘Outlaws Of The Dynasty’ veers in a different direction with its riffs before bombarding us with a return to the form emanated from the previous tracks. DECIPHER’s first EP won’t start any fires blazing in the Black Metal community, but it most definitely will light a spark. More tracks like ‘Unobstructed Sequence Of Disorder’ on their hopefully upcoming full-length, and this band will fucking rip our souls in half. For more information, check out www.facebook.com/decipherbandgr or https://deciphergr.bandcamp.com