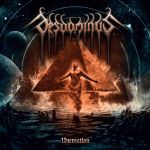 When it comes to Death Metal and its sub-genres it seems melodic Death Metal is having a hard time. We have tons of releases each month but I can hardly remember a band which is traveling the paths of IN FLAMES and DARK TRANQUILLITY. By the way, in my eyes AMON AMARTH are a sub-genre of their own. Of course it is to some degree a problem of my personal filter bubble, since I am more the old school guy. DESDOMINUS from Brazil are looking back on a quite long existence, the foundation was back in 1997. Six years later the debut "Without Domain" was spawned and after an hiatus of ten years the follow-up "Devastating Millenary Lies" saw the light of day. It seems the gap is getting closer, because two years later, in 2015, they released "Uncreation", album number three. At first I thought it is a re-release by Misanthropic Records, but no, this is the original album back from 2015. Internet or not, obviously it took some time that it made its way to Europe. And as well as the arrival is delayed, the music takes the listener some 20 years back to the glorious times of melodic Death Metal. The melodies are fizzing like water in a boiler, most songs are played fast, yet without blast beats or double bass drums. Naturally an acoustic guitar (‘Introspective’) track is making an appearance and the song ‘Inner Elevation’, clocking at nine minutes, is a roller coaster ride of emotions, from fast aggressive to mournful up to downcast and bask. And do not be afraid, there are no influences like Alternative Rock, Groove Metal and no one is wearing flared trousers. Everyone interested in genuine melodic Death Metal should definitely take a listen and visit www.facebook.com/desdominus or www.misanthropic.com.br